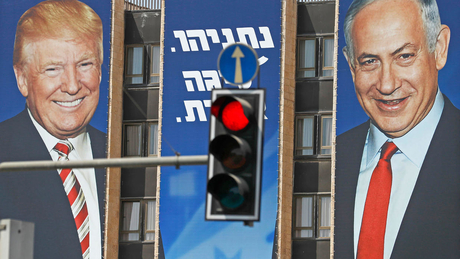 The president, overshadowed by his impeachment trial in the Senate and a difficult reelection campaign, has a packed schedule both Monday and Tuesday taking him deep into Israel's turbulent politics.

Israel goes to the polls in a little over a month, with Netanyahu's right-wing Likud and Gantz's centrist Blue and White party currently running neck-and-neck.

On Monday, Trump greets both men separately for Oval Office talks. Then, on Tuesday, he again hosts Netanyahu for what is expected to be the official rolling out of the White House's long-awaited Israeli-Palestinian peace plan.

While the plan -- the latest iteration in decades of so-far failed US attempts to resolve the conflict -- already faces strong criticism, Trump's friend "Bibi" Netanyahu could be an early beneficiary.

A peace plan favoring the Israeli side in the conflict -- as critics say the text will show -- would demonstrate yet again that Netanyahu enjoys the US president's near-unquestioning support.

These include breaking with international diplomatic consensus to recognize the disputed city of Jerusalem as the Israeli capital, recognizing Israeli sovereignty over the Golan Heights, which were seized from neighboring Syria, and ending opposition to Israeli settlements on occupied Palestinian land.

This time, he'll be presenting what the administration calls a peace plan and standing alongside for joint remarks to the press with Netanyahu on Tuesday.

For a US president impeached for abuse of office and an Israeli prime minister fighting corruption charges, the pomp of a White House visit and the weighty matter of trying to resolve the Israeli-Palestinian conflict will be welcome changes of conversation.

Trump has repeatedly cast himself as the most "pro-Israeli" American president in history.

That's a hugely popular stance among the evangelical Christian voters forming a key layer of his base, and this latest initiative will only burnish Trump's reputation just when he needs to shore up political support.

Trump's peace plan, overseen by his son-in-law Jared Kushner, has been gestating in secret for so long that skeptics asked whether it even really existed.

Aaron David Miller, a Mideast expert with the Carnegie Endowment for International Peace, said Kushner's team wants to "finally, basically demonstrate that they have a plan" -- and to do so ahead of the US presidential election.

In the short term, said Dennis Ross, a US diplomat who worked on the issue under several administrations, "anything that can divert attention away from what's going on" is the goal.

Last Thursday, Trump described the still-unpublished plan as "great" and said it "really would work."

Netanyahu said before leaving for Washington that Trump would "present his deal of the century... I'm full of hope that we can make history."

Gantz is also enthusiastic, saying the plan will "go down in history," allowing "different players in the Middle East to finally move ahead towards an historic regional agreement."

That seems unlikely, however, because the other principal player in the conflict -- the Palestinians -- say they are rejecting a plan in which they were never included anyway.

The fact that they are not invited to the White House this week appears to underline their point.

On Sunday, Palestinian leaders warned that instead of bringing peace, the plan could trigger their withdrawal from key provisions of the decades-old Oslo Accords, which sought to map out peaceful Israeli-Palestinian relations.

"The US administration will not find a single Palestinian who supports this project," the Palestinian foreign ministry said in a statement on Sunday.

"Trump's plan is the plot of the century to liquidate the Palestinian cause."

Trump, why are you hell-bent on helping those who deny Jesus and his mother, who consider them to be liars and on top of that have stolen the land, massacred innocents and exiled the people while oppressing the remaining ones? Your sect is crazy. You consider the middle eastern christians to be heretics while your sect who does not follow the bible have turned the way of Jesus into racism, support for injustice and making a big fuss about being against abortion (without wanting to give any financial help to poor families and single moms). You are misguided which is a shame since the US needs a strong moral christian president to stop the liberals from introducing 58 new genders.