British City Keeps Calm and Carries On despite Virus Cases 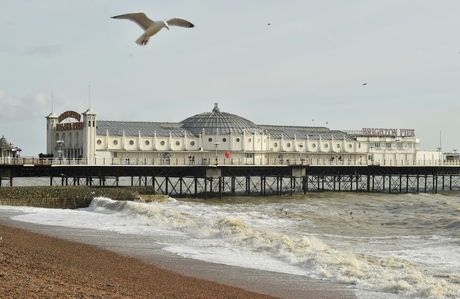 In Brighton, the epicenter of Britain's cluster of COVID-19 cases, face masks are doing a roaring trade -- though most locals and tourists have decided to keep calm and carry on.

Five people in the city on England's south coast have so far contracted the virus.

They are all seemingly linked to so-called "super-spreader" Steve Walsh, who was infected on a business trip to Singapore and has now recovered. They include two healthcare professionals.

Some doctors' surgeries were temporarily closed, and some schoolteachers and pupils have gone into recommended self-isolation as a precaution.

The death toll in China , where the virus first emerged, has topped 1,100. But face masks were a rare sight in the city's quirky shopping streets along the sweeping seafront -- even if some were taking the precaution.

Tran Huong, 51, originally from Vietnam, regularly uses face masks when working in her nail bar in the city center.

But after putting a "face masks for sale" sign in the window, as she turns her premises into a clothes shop, she said she had sold more than 300 in less than a week.

"I've only got a few left," she said, pulling out a near-empty packet of 100 made-in-China disposable masks.

"It's Western people, young guys, teenagers come in and ask for it. They're worried. It's for protection. If you go to the chemist, they haven't got it.

"It's quite ridiculous, the whole thing. It's made out to be much bigger than it is."

Nevertheless, she added, her businessman son had sold thousands of masks online.

Some doctors' surgeries have been closed for fear of spreading the virus after coming into contact with those diagnosed.

They include The Avenue Surgery, a small, redbrick building behind a neatly trimmed hedge.

It had two large red signs reading "STOP" on its doors, accompanied by warnings about COVID-19.

Another notice explained that one of its doctors "has been in contact with someone who has tested positive for coronavirus.

"He has been advised to self-isolate for 14 days and therefore will be unable to attend the surgery. We appreciate your support during this extremely difficult time."

Inside, the wooden benches in the waiting room lay empty.

Darren Buckley, 53, lives a few doors away and is registered at the surgery.

He said his daughter had been meant to come in for a pre-natal check but had to go elsewhere.

"I'm not that worried," he told AFP. "It's got to be in somebody's surgery somewhere."

He said the local response had been "typically British: chin up, keep on, go to work; just wash your hands. Basic health precautions, and fingers crossed, the government knows what they're doing."

Brighton is a tourist magnet, drawing people to its pebble beach, amusements pier and alternative atmosphere.

The virus outbreak had not put off day-trippers enjoying the wintry sunshine, despite the chilly breeze whipping off the waves of the Channel.

Wrapped up against the cold, Julie Frogley, 59, from nearby Horsham, was strolling on the pier with her great-nephew as local DJ Fatboy Slim came jogging past.

"I think we're quite good at containing things once we know what they are. To stop doing things because of one small outbreak would be foolish," she said.

"It was on the news very quickly, they told people what to do. If people follow those guidelines, there shouldn't be an issue.

"It's not so much stiff upper lip, it's carrying on and not panicking. Don't panic-buy masks because they're not going to do you much good."

Aaron Charles, 32, a professional dancer from London, was walking along the seafront, making his first visit to Brighton since childhood.

"It doesn't put me off at all. It's fine. From what I've heard, it's literally just a flu," he said.

"If it became like an outbreak, if people were literally falling over every three seconds and started coughing up blood, I'm gone. I'm leaving the country, I'm going that direction and I'm never looking back!" he said, pointing out to sea.