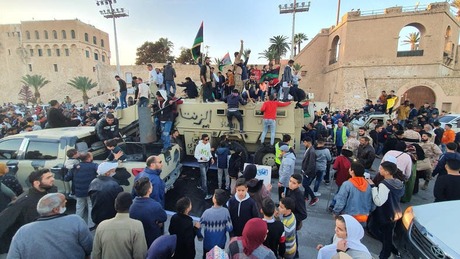 Rival forces clashed in the Libyan capital Thursday, witnesses and pro-Government of National Accord (GNA) forces said, a day after a U.N. Security Council resolution called for a "lasting ceasefire."

Flights were again suspended at Mitiga, Tripoli's sole functioning airport, following rocket fire, as fighting broke out between forces loyal to the U.N.-recognized GNA and fighters of strongman Khalifa Haftar in the capital's south.

Witnesses heard explosions in the largely agricultural area of Machrou al-Hadhba about 30 kilometers (18 miles) south of the Tripoli city center.

Rockets also struck residential neighborhoods, killing one woman and wounding four other civilians, according to a spokesman for the health ministry, Amin al-Hachimi.

GNA spokesman Moustafa al-Mejii confirmed fighting had broken out in the suburb.

Mejii accused forces loyal to eastern Libya-based Haftar of having repeatedly violated a fragile truce called for by outside powers Russia and Turkey since January 12.

"Haftar's militias tried to advance in the region of Machrou al-Hadhba, but our forces repelled the attack," he said.

Despite the truce, there has been sporadic fighting almost every day near Tripoli, and arms continue to flow into the country.

The U.N. Security Council adopted on Wednesday a resolution calling for a "lasting ceasefire" in the conflict-hit country, a first since Haftar launched his offensive to seize Tripoli in April.

The resolution called for continued negotiations by a joint military commission set up in January between the two sides, with the goal of achieving a "permanent ceasefire".

This would include a monitoring system, a separation of forces and confidence-building measures.

The commission's Geneva meeting ended Saturday without a resolution, but the U.N. proposed resuming talks from February 18.

More than 1,000 people have died in the clashes between Haftar and the GNA, while another 140,000 have been displaced, according to the U.N.