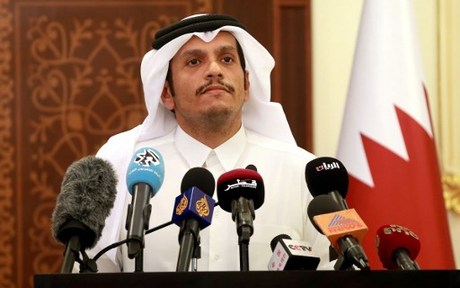 Talks between Doha and Riyadh to resolve a two-year-old regional spat have stalled, Qatar's foreign minister has said, with diplomats and analysts suggesting the situation has hit a stalemate.

Saudi Arabia, along with its allies the United Arab Emirates, Bahrain and Egypt, cut all diplomatic, trade and transport ties with Qatar in June 2017.

"We have always been very open for dialogue, since the start of the Gulf Cooperation Council (regional bloc) crisis," Qatar's Foreign Minister Mohammed bin Abdulrahman Al-Thani said at the Munich Security Conference on Saturday.

"It's been almost three years since the crisis started. We are not the perpetrators of that crisis and we've been very open and clear that we are open to any genuine intention to resolve this problem.

"We demonstrated this when there was an opening last year in November. Unfortunately these efforts didn't succeed and have been suspended at the beginning of January."

Two diplomats in Doha said they did not see any indications that the nascent talks could be resumed for the foreseeable future following a flurry of engagement at the end of 2019.

The pan-Arab Asharq Al-Awsat newspaper quoted a Gulf diplomat on Wednesday who suggested Riyadh pulled out of the talks because the Qatari negotiators "did not seem serious in reaching compromise."

The unnamed diplomat accused Doha's team of "prevaricating to prolong the negotiations" and added that Riyadh wanted a solution that included all of the boycotting countries.

Abdulrahman said that while Qatar was not responsible for the suspension, Doha remained open to further dialogue.

"We are trying to address the substance, to understand the root causes, and not to deal with whatever is said in the media or mentioned by non-officials," he said.

"We want to be forward-looking... so that it's not repeated again."

King's College London assistant professor Andreas Krieg said the Saudis were "unhappy" that the Qataris demanded "some sign of goodwill" before engaging in reconciliation efforts.

"They already came to an agreement (on) overflight rights. The Saudis wanted to go ahead, but then Saudi Crown Prince Mohamed Bin Salman changed his mind while in a majlis (formal gathering) in Abu Dhabi," he told AFP.

"It runs very deep. The UAE have not taken a tiny step away from crisis mode. They can sustain this indefinitely."

Krieg said the UAE's motivation to boycott Qatar was Doha's perceived closeness to the Muslim Brotherhood, while for Saudi the priority was to address Qatar's alleged closeness to Iran.

Keep staling Mr Al-Thani, you and your tiny monarchy will be rewarded once the Islamic Republic of Iran takes over and converts the world.

The west give much liberty to that dogs of meca...after the destrution of catholic portuguese empire ..