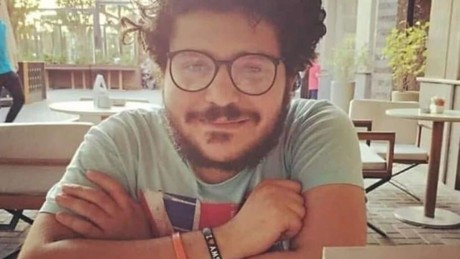 The a postgraduate student at Bologna University and researcher with a prominent local rights group was arrested on 7 February at Cairo airport upon arrival for a family visit.

His lawyers said Zaky, 28, was beaten and electrocuted by security forces while in custody, according to the Egyptian Initiative for Personal Rights (EIPR).

"He (Zaky) did not testify to suffering any harm or abuse during his arrest or detention," the public prosecutor's office said in a statement.

"The public prosecution also did not observe any visible injuries."

Zaky was detained on a warrant issued in September after had left the country to pursue his studies.

He faces accusations including disseminating false news and misusing social media to disrupt public order, charges he has denied, according to the prosecutor's statement.

On Saturday, authorities rejected a motion for his release and ordered he remain in custody until he faces the prosecutor next week, EIPR said.

Amnesty International has called for Zaky's immediate release, while Italy has also demanded that the researcher be freed.

His arrest has revived painful memories of the 2016 disappearance and murder of an Italian researcher in Cairo, a case for which Italian authorities are still seeking answers.

Doctoral student Giulio Regeni, 28, disappeared in January 2016 in Cairo, where he was carrying out research on Egyptian trades unions.

His badly mutilated body was found in a suburb of the capital a few days later, bearing the marks of torture.

On Sunday, the Egyptian Commission for Rights and Freedoms said it had requested an independent probe into the allegations that Zaky had been tortured.

Critics of President Abdel Fattah al-Sisi and his government are regularly targeted in an ongoing crackdown since the 2013 military ouster of Islamist president Mohamed Morsi.

The clampdown has led to the arrests of thousands of Morsi's Islamist supporters as well as secular activists, journalists, lawyers and academics.

"The escalating attacks on human rights defenders... show that Egypt under President Abdel Fattah al-Sisi is a place where those who defend human rights do so at grave risk to themselves," Human Rights Watch said last week.