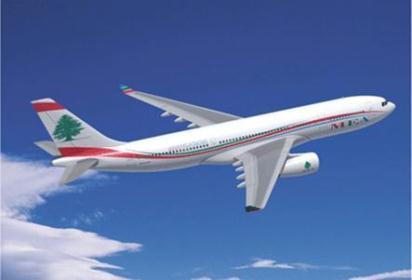 MEA had announced Saturday that it would only accept payments in U.S. dollars from Monday.

Lebanon is in the throes of an economic meltdown and a biting liquidity crunch that has seen the local currency depreciate on the parallel market and banks impose stringent controls on withdrawals and transfers abroad.

In the wake of the announcement, dozens of customers crowded the MEA offices at Beirut airport -- the only one open on Sunday -- in the hopes of paying for their tickets in Lebanese pounds, images broadcast on local TV showed.

Middle East Airlines (MEA) is majority-owned by the Lebanese state and administrated by the country's central bank.

The Lebanese pound has been officially pegged at 1,507 pounds to the U.S. dollar since 1997, and the two currencies are used interchangeably in the tiny Middle Eastern country.

But in recent months, the pound has plunged against the greenback on the parallel exchange market.

Major banks in Lebanon began tightening banking controls this month, halving the amount of dollars depositors are allowed to withdraw every month.

MEA's announcement was met with an angry response on social media.

"MEA: A national airline that does not accept payment in its own national currency. Logic redefined," one Twitter user wrote.

Another posted in response to the news: "Middle East (MEA) belongs to the Lebanese state, it's a flagrant violation of the law. We're not heading for collapse, we're in the middle of it."

The central bank chief said in January that he agreed with money exchange houses capping the parallel rate at 2,000, but the price of dollars at some exchanges continues to rise.

The pressure worked my friend, the question is how many times would MEA keep going before throwing the towel and then, well then, no one can fly out and to Lebanon (try to buy a ticket from a foreign company with a Lebanese credit card in LBP or USD); besides the crooked political class who owns private jets of course!

MEA has always been overpriced and underwhelming when it comes to service and quality. Just fly a different airline, people.

Their monopoly allows them to have direct flights to many cities and capitals you can’t get anywhere else. But you’re right, it’s overpriced, the service is bad, the seats aren’t reclining, the on board multimedia service are from the 20th century and the kids scream because most Lebanese don’t educate their children.

Have you taken Luftansa to Frankfort sometime in your life?
It is like "bosteit el day3a" carrying our brothers the Shia from the promised land to the land of the kuffar.
Don't get me wrong, I am not defending MEA, but they did a good job lately before Mr. Low Bran Bas Cils started getting interested in it.

As far as I am concerned. MEA can go bankrupt... I will actually be happy. Like Maxx is saying, they are a Mafia, and impose disgusting pricing because of the lack of competition they forbid...They are down 17% already..