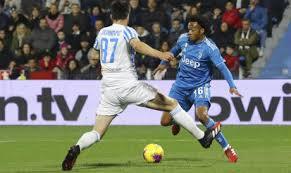 Sport in Italy is being heavily disrupted by a surge in the number of new coronavirus cases but Napoli's Champions League match against Barcelona in the south of the country on Tuesday is not at risk.

Italy reported its fifth death from the virus on Monday and it has the most confirmed cases in Europe.

A surge in infections at the weekend forced the postponement of four Serie A football matches in the north of the country where the outbreak is concentrated in two regions.

The game between Torino and Parma in Turin was called off as well as the matches between title-chasing Inter Milan and Sampdoria, Atalanta and Sassuolo, and Hellas Verona and Cagliari.

AC Milan also announced the postponement of their women's team's match against Fiorentina on Sunday.

The government announced on Sunday that all sporting events in two northern regions would be suspended, with Sports Minister Vincenzo Spadafora saying the government had "a duty to be prudent and responsible".

Napoli's last 16 Champions League match against Lionel Messi's Barcelona side will go ahead on Tuesday as southern Italy is currently unaffected.

European football body UEFA said they were monitoring any change in that situation.

"UEFA is following the situation closely and is contact with the clubs and the authorities concerned," a spokesman said.

A medical taskforce met at the Italian Football Federation's headquarters in Rome on Monday to plot a way forward, but it seems likely that the high-profile Serie A clash between Juventus and Inter on Sunday will be played behind closed doors.

Inter's home Europa League match scheduled for Thursday against Bulgarian club Ludogorets could also be played in an empty stadium, according to reports.

A planned get-together of Italy's under-19 national football team, which was to feature the coach of the senior team, Roberto Mancini, was postponed on Monday.

In the latest development, two Pro 14 rugby union matches due to be played this weekend have been rescheduled.

They are Zebre's clash with Welsh club Ospreys in Parma, and Irish side Ulster's visit to Treviso-based side Benetton.

That followed the postponement of the women's Six Nations rugby clash between Italy and Scotland, that had been scheduled to take place in Legnano, north of Milan, on Sunday.

"To ensure the safety of our players and spectators PRO14 Rugby fully supports the preventative measures taken in Italy and will adhere to the directives from the World Health Organisation (WHO) and local authorities," a statement on the Pro 14 website said.

Other sports were also hit with the Italian Olympic Committee (CONI) confirming that in line with government instructions, all events in the Lombardy and Veneto regions would be postponed.

"We agree and align with the government's provisions," said CONI president Giovanni Malago.

"I believe that at this moment the world of sport should not go its own way. Health is the primary concern."

Eleven towns -- 10 in Lombardy and one in neighboring Veneto -- are under lockdown, with some 50,000 residents prohibited from leaving.

Regional authorities have ordered gathering spots, such as bars, restaurants, cinemas and discos to close.