Drillship Off Lebanon to Start Oil and Gas Exploration 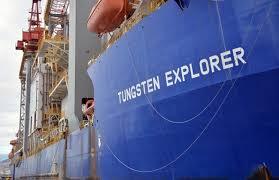 A drillship anchored off Lebanon Tuesday to explore for oil and gas, an energy firm and the government said, raising hopes for a future boost to the country's crumbling economy.

Information Minister Manal Abdul Samad said the first ever such exploration would start within 48 hours.

Anticipation has been high in Lebanon for exploration to start, with many hoping a major hydrocarbon discovery could help redress the debt-burdened economy.

Energy Minister Raymond Ghajar said on Twitter the ship had anchored in block 4.

Total said the drilling would last two months, and start at 1.5 kilometers (0.9 miles) below sea level.

"The exploration well aims at exploring targets located more than 2,500 meters below the sea bed," it said.

A consortium composed of energy giants Total, Eni and Novatek was awarded two of Lebanon's 10 exploration blocks in 2018 -- block 4 and block 9 near the Israeli border.

Drilling was initially supposed to start in December for block 4.

Exploration of block 9 had been scheduled for several months later, but has been far more controversial as Israel claims it belongs to it.

Total has said it was aware of a border dispute affecting less than eight percent of block 9, and would drill away from that area.

Total spokesman Gael Baudet on Tuesday said Tungsten Explorer would only be digging a well in block 4.

Results from that site were still needed to finalize a strategy on how best to probe block 9, he said.

Lebanon is one of the most indebted countries in the world, with a burden equivalent to 150 percent of its GDP.

It is in the grips of a severe liquidity crunch that has hampered imports, sparked price hikes and caused the value of the Lebanon pound to plummet on the parallel exchange market.