Juve Fans Free to Travel to France despite Coronavirus Fears 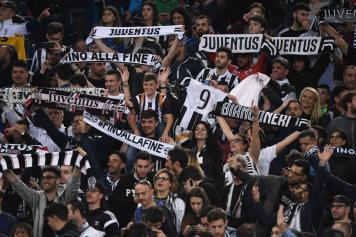 Juventus fans have been given the all clear to travel to France for a midweek Champions League clash against Lyon despite the spread of Coronavirus in Italy, the Italian club confirmed.

Upcoming matches in Serie A and the Europa League will be played behind closed doors to combat the highly-contagious virus which on Tuesday spread to Tuscany and Sicily in the south of the country.

Napoli's Champions League last 16, first leg match against Barcelona in Naples on Tuesday will go ahead on front of supporters at the San Paolo Stadium.

And French authorities and Lyon announced that "no special restrictions will be implemented for Juventus fans," the Turin club said in a statement.

"Fans following Juventus will be able to watch tomorrow's Champions League match at the Groupama Stadium without any problems."

The number of confirmed infections in Italy has jumped to 283, with over 50 new cases reported since Monday, with seven people having died after contracting the virus.

Eleven towns -- 10 in Lombardy and one in neighboring Veneto -- are under lockdown, with some 50,000 residents prohibited from leaving.

Two women's Euro League basketball games which had been due to take place on Wednesday in Italy have now been pushed back to Thursday and will now be played in neighboring Slovenia.

The matches between Italian club Reyer Venezia and Latvian side TTT Riga; and Schio against Hungarian outfit Sopron Basket, had been due to be played in the Venezia region which has 38 reported cases of the virus.

FIBA, the international basketball federation, said the matches will now be played one after the other in Ljubljana.

In football, Inter Milan's Europa League match with Ludogorets on Thursday will be played with no fans present.

Sports Minister Vincenzo Spadafora did not specify which Serie A matches at the weekend would be included in the ban.

There are six games in the regions hit, including the clash on Sunday evening between leader Juventus and third-place Inter.

"Following the demands of the sports world and knowing that the ban on sporting events open to the public remains in force in six regions of northern Italy, we have agreed to the holding of matches behind closed doors," said Sports Minister Vincenzo Spadafora after a meeting of the Council of Ministers.

"These are decisions that leagues have to make," continued Spadafora.

"They tell me that the dates are tight, but the need is to safeguard health."

Several governments have announced additional measures for travelers arriving from Italy, in particular from the two northern regions of Lombardy and Veneto.

Turin is situated in the northern Piedmont region where six cases have been confirmed.