Iran Open to 'Any Initiative' after Talks to Save Nuclear Deal 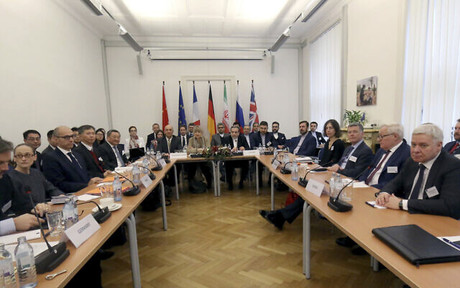 Iran said on Wednesday it was open "to any initiative" as Western powers stepped up efforts to save a 2015 deal to curb Tehran's nuclear ambitions -- on life support since a 2018 decision by the US to withdraw its backing and reimpose sanctions.

After talks with the remaining parties to the deal in Vienna, Iranian negotiator Abbas Araghchi said he was "fully prepared" to reverse measures that apparently violated Tehran's commitments -- but only if the other side reciprocated.

Britain, France and Germany launched the deal's formal dispute process in January after Iran said it would no longer observe limits on the number of centrifuges used to enrich uranium -- one of the deal's key stipulations.

The dispute process spells out several steps, the last one of which is notifying the UN Security Council. UN sanctions would then automatically "snap back" after 30 days unless the Security Council voted to stop it.

Iran argued on Wednesday that it needed some benefits under the deal, which promises it sanctions relief in return for curbing its nuclear program.

Renewed U.S. measures have crippled the Iranian economy and were cited as the reason for Iran restarting various nuclear processes since May last year.

The European Union -- which oversaw the Vienna talks between Iran, the three western European nations, Russia and China -- said "serious concerns" had been expressed over compliance.

But the EU statement added: "Participants also acknowledged that the re-imposition of U.S. sanctions did not allow Iran to reap the full benefits arising from sanctions-lifting."

A diplomat who asked not to be named told AFP on Tuesday that no timetable had been fixed for solving the dispute, adding "we are still far from a result".

The diplomat said everyone wanted to save the deal, formally known as the Joint Comprehensive Plan of Action (JCPOA), so that UN inspectors could continue working in Iran.

The Internation Atomic Energy Agency (IAEA) has been tasked with monitoring the deal's implementation and its latest report is expected within days.

"We are still open to any initiative which can ensure Iran's dividends of the JCPOA," said Araghchi, the Iranian Deputy Foreign Minister, after the Vienna talks.

"We are fully prepared to reverse steps we have taken so far in return for the fulfilment of the other side's commitments under the JCPOA."

Western diplomats believe Iran is unlikely to heed calls to come back into full compliance without substantial concessions -- such as an end to US sanctions or Europe taking measures to offset their economic impact.

But they hope the use of the dispute process will convince Iran not to make any more moves away from the deal, giving space for back-channel diplomacy aimed at bringing Washington and Tehran back into alignment.

The diplomat told AFP that Iran could also "at least freeze its uranium stocks" as a possible positive outcome of the current discussions.

At a major international security conference in Munich earlier this month, Iran's Foreign Minister Mohammad Javad Zarif said Tehran would be prepared to move back towards the deal if Europe provides "meaningful" economic benefits.

Europe has set up a special trading mechanism called Instex to try to enable legitimate humanitarian trade with Iran, but it has yet to complete any transactions and Tehran regards it as inadequate.

The renewed U.S. sanctions have almost entirely isolated Iran from the international financial system, driven away oil buyers and plunged the country into a severe recession.

Now that the sanctions have reminded them that they are not above approach? lol
Pretty soon they will be beging for someone to talk to them.