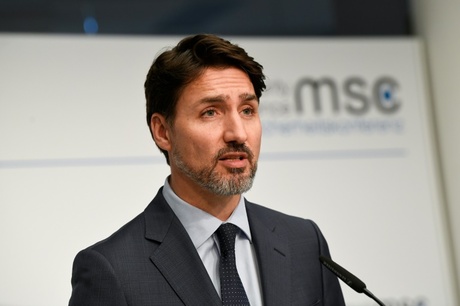 Prime Minister Justin Trudeau called on Monday for a major national debate involving everyone from industry to indigenous groups to move the country to carbon neutrality by 2050 and still grow the economy.

Trudeau was reelected last October, with a minority government, after a campaign focused on climate issues. He vowed that Canada would reach net-zero carbon dioxide emissions by mid-century. Sixty-six other countries have already signed onto the pledge

"Around the world and right here in Canada, the debate between environment and economy is becoming increasingly contentious and polarized," Trudeau said in a speech to mining executives at an annual conference in Toronto.

"We want to work with you to grow Canada's prosperity by taking carbon pollution out of our environment and out of our economy," he added. "This is a big project, not one any government can do on its own."

He called for the national debate over the coming next months.

"We all need to roll up our sleeves and pitch in: governments, businesses, civil society, indigenous communities and all Canadians," he said during his first major speech on the environment this year.

Trudeau's words came days after an Alberta mining firm's surprise announcement that it had withdrawn its application to develop a controversial Can$20 billion ($15 billion)oil sands mining project.

Explaining that decision, the CEO of Teck Resources said investors and consumers increasingly want a framework in place that reconciles resources development and climate change, but "this does not yet exist here today."

Another conflict played out in recent weeks after a localized indigenous protest against a British Columbia natural gas pipeline grew into widespread blockades of railways, roads and ports across the vast country, causing major supply disruptions and layoffs.

On Sunday the government and indigenous chiefs said they had reached a tentative arrangement to end the disruption.

Carbon pricing is the primary measure undertaken so far by Trudeau's government to reduce Canada's greenhouse gas emissions, but economists said in November that the levy was not enough to meet Canada's Paris Agreement commitment to slash CO2 pollution.