In Italy and Beyond, Virus Outbreak Reshapes Work and Play 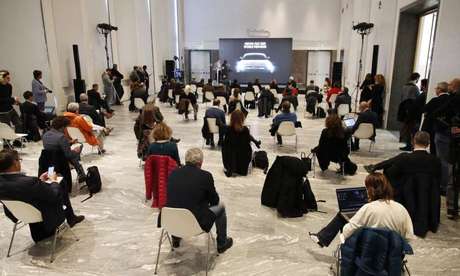 Italy closed all schools and universities and barred fans from all sporting events for the next few weeks, as governments trying to curb the spread of the coronavirus around the world resorted to increasingly sweeping measures that transformed the way people work, shop, pray and amuse themselves.

With the virus present in more than 80 countries, Saudi Arabia barred citizens from making the Muslim pilgrimage to Mecca, Iran canceled Friday prayers for a second week, and leader after leader pleaded with citizens to put an end to that traditional symbol of mutual trust, the handshake.

The Italian government decreed that soccer games and other sporting events will take place without spectators until at least April 3. Italy is is the epicenter of Europe's coronavirus outbreak. More than 3,000 have been infected and at least 107 have died, the most of any country outside China, where the illness began.

"I know it's a decision with an impact. As education minister, I obviously want my students back in school as soon as possible," said Education Minister Lucia Azzolina.

Italy, Iran and South Korea confronted fast-growing clusters of the disease that accounted for about 80% of new cases outside China, according to the World Health Organization. In all, more than 95,000 people have contracted the virus worldwide, with more than 3,200 deaths.

In the United States, the death toll reached 11.

Iran reported 92 deaths among its more than 2,900 cases, though many fear the outbreak is far bigger. Among the ill are dozens of members of the government. The Islamic republic canceled Friday prayers to avoid public gatherings.

"The virus has no wings to fly," said Health Ministry spokesman Kianoush Jahanpour. "We are the ones who transfer it to each other."

WHO said about 3.4% of people infected with the COVID-19 virus globally have died, making it more lethal than the common flu. But that figure was met with skepticism, with scientists noting that large numbers of mild cases have probably gone undetected or unreported. A study last week in the New England Journal of Medicine of data from more than 30 Chinese provinces estimated the death rate at 1.4%.

In Daegu, the South Korean city at the center of that country's outbreak, a shortage of hospital space meant about 2,300 patients were being cared for in other facilities while they awaited a hospital bed. Prime Minister Chung Se-Kyun sought to assure people in the southeastern city, saying, "We will win the war against COVID-19."

In Europe, officials told French soccer players to simply disperse — without shaking hands — after lining up, and referees and coaches will no longer shake hands either. In Paris, the Louvre finally reopened after closing because of fears among workers about catching the virus from visitors, but it will no longer accept cash, because of the danger of germs.

A news conference at Milan's Triennale contemporary art and design museum looked like an exhibit itself, with journalists' chairs spaced more than a yard (meter) apart.

In Israel, the country's chief rabbi urged observant Jews to refrain from kissing the mezuza, the small box containing a prayer scroll that is posted by Jews on their doorposts. Prime Minister Benjamin Netanyahu also urged people to adopt the Indian greeting of "namaste," with hands together, rather than a handshake.

Businesses of all types suffered a downturn as travel and tourism plummeted and worried consumers changed their habits.

"People are afraid to touch anything or take anything from us," said Maedeh Jahangiri, a perfume seller at a mall in Tehran.

China reported 139 new cases Thursday and 31 deaths, raising its totals to 80,409 cases and 3,012 deaths. The number of cases was higher than Wednesday's figure, but new deaths were lower, as the illness continues to decline in the country. While hardest-hit Hubei province had most of the new cases and deaths, hospitals there released another 1,923 patients who were declared cured.

Doctors working in Wuhan, Hubei's capital where the illness emerged in December, said hospitals there have an increasing number of empty beds but cautioned a new spike of infections was always possible. "The war is not over," said Dr. Cao Bin, who specializes in respiratory research.