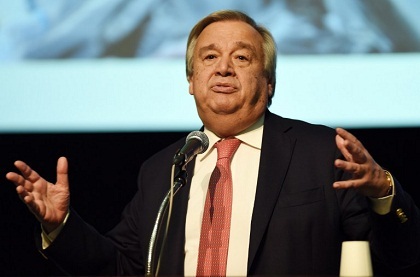 "Global heating is accelerating," Guterres told reporters, commenting on the report by the World Meteorological Organization (WMO), a U.N. institution.

The WMO report confirmed findings in December that 2019 was the second hottest year on record, "with the past decade the hottest in human history," Guterres said.

"We have no time to lose if we are to avert climate catastrophe," Guterres emphasized. "Let us have no illusions. Climate change is already causing calamity, and more is to come."

The WMO report looked at different aspects of climate change, from the accelerating sea level rise due to melting ice to changes in land and marine ecosystems.

The planet will continue to warm up if greenhouse gases continue to increase, said WMO Secretary General Petteri Taalas.

"We just had the warmest January on record. Winter was unseasonably mild in many parts of the northern hemisphere," Taalas said.

"Smoke and pollutants from damaging fires in Australia circumnavigated the globe, causing a spike in CO2 emissions," he said.

"This is exposing coastal areas and islands to a greater risk of flooding and the submersion of low-lying areas."

Manuel Pulgar-Vidal with the World Wide Fund for Nature NOG agreed with the urgent demand for action.

"We are in a critical year for action -- the longer we wait, the harder the challenge of addressing the climate crisis is going to get," he said in a statement.