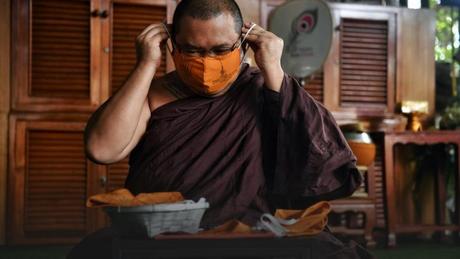 A Buddhist monk scrawls a prayer on an orange face mask beseeching "an end to the suffering" caused by the deadly coronavirus -- a finishing touch to the facial covering weaved out of recycled plastic at one Thai temple.

The country has one of the highest numbers of confirmed cases in Southeast Asia, and over the weekend infections doubled to 721 in a pandemic that has killed more than 15,000 globally.

As borders close and public spaces shut down, a group of innovative monks near Bangkok are turning to their Buddhist faith in a bid to help contain the disease.

Chak Daeng temple is famous for a campaign led by its environmentally conscious abbot to produce robes from the 15 tonnes of plastic bottles it receives every month.

Monks and volunteers weave synthetic fibers -- extracted from the plastic -- with cotton into piles of saffron-colored cloth.

But Abbot Pranom Dhammalangkaro last month started pivoting some of the production to making face masks in a bid to protect people.

An extra filter layer is sewn on the inner lining which he tells AFP will shield users from potential spray droplets.

For additional peace of mind, Wat Chak Daeng's "talisman master" can also write on the mask a Buddhist prayer, suggesting that "to know the problem is to find a way to end the suffering".

Many Buddhists believe finding the source of one's troubles sets one on a path towards enlightenment, but Abbot Pranom admits the prayer will not work for everyone.

"For those who don't believe in this kind of thing, it won't make any difference."

After bouts of panic buying in the capital over the weekend, he also made a plea for Thais to abide by Buddha's teachings and remain "conscientious" to get through the crisis.

In neighboring Myanmar -- whose zero case claim is being treated with increasing skepticism -- Buddhist monks have also been praying hard to try to protect their nation.

One group even took to the skies over the weekend to sprinkle "holy water" from hot air balloons over the country's cherished temple-strewn landscape of Bagan.