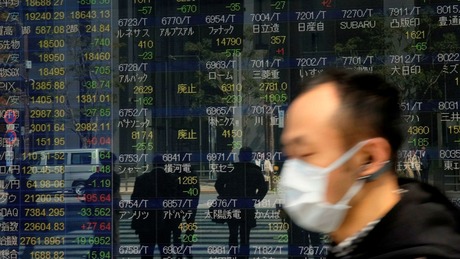 Asian markets mostly rose Thursday as investors breathed a sigh of relief that US senators have finally passed a gargantuan stimulus package for the world's top economy after being delayed by wrangling over details.

The unprecedented $2 trillion plan -- described by Senate Majority Leader Mitch McConnell as a "wartime level of investment" -- helped spur a surge across global equities as panicked traders worried about the impact of the coronavirus sweeping the planet.

But another advance on Wall Street was blunted Wednesday as it emerged that four Republican senators have baulked at the generous provisions agreed to in the bipartisan deal with the White House.

The bill eventually cleared the Senate by an overwhelming majority and will now head to the House of Representatives before going to President Donald Trump for his signature.

The monster deal thrashed out between Republicans, Democrats and the White House includes cash payments to American taxpayers and several hundred billion dollars in grants and loans to small businesses and core industries. It also buttresses hospitals desperately in need of medical equipment and expands unemployment benefits.

The plan, together with a huge bond-buying programme by the Federal Reserve that effectively prints cash, is part of an unprecedented global response to the outbreak, which has even seen Germany put together a list of measures worth more than $1 trillion.

Tokyo ended down 4.5 percent after surging almost a fifth over the previous three days, while Hong Kong dipped 0.3 percent and Shanghai eased 0.2 percent.

There were also healthy gains in Taipei and Bangkok.

Singapore also bounced back into positive territory, having earlier lost more than two percent. Data in the morning showed the city-state's economy suffered its worst quarterly contraction since the financial crisis more than a decade ago, giving global investors an early insight into the economic effects of the pandemic.

Singapore is considered a bellwether for trade-reliant Asian countries.

While the US bill provides much-needed support, observers continue to err towards caution with most now expecting the global economy to plunge into recession as countries go into lockdown, turning off the growth taps.

"While this is good news... it's impossible to gauge the ultimate economic impact of the COVID-19 pandemic for weeks, possibly months, and until that point, the sustainability of any rally in oil or equity markets is questionable and suggests the current high level of volatility will likely extend," said AxiCorp's Stephen Innes.

"All the stimulus chatter will fade if the COVID-19 headcount curve goes vertical. The reality is the 'Big Bazooka' sway is impossible to sustain, and not to mention the surprise effects greatly diminish. Ultimately, policy is harder to maintain the more protracted virus outbreaks continue."

Investors are now nervously awaiting the release later Thursday of US jobless claims data, which is expected to show a massive rise.

"The high-frequency data will confirm we're in a horrible vortex of the fastest and most substantial rise in the US unemployment in modern financial history," Innes added.

And CMC Markets analyst Michael Hewson said the figures "could well be extremely ugly" and warned some estimates had put them at around the four million mark.

Also Thursday, G20 leaders will be holding a summit by teleconference, with hopes they can provide a united front in the face of the pandemic after the group of leading economies faced criticism that it has been slow to address the crisis.

French presidential sources said the virtual meeting would focus on "coordination on the health level" as well as sending a "strong signal" to financial markets over efforts to stabilise the global economy.