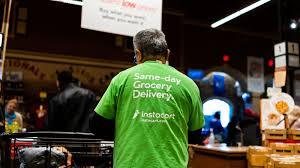 Grocery delivery startup Instacart's delivery workers were set to begin a work stoppage Monday to press safety demands, as a walkout was planned by employees at an Amazon warehouse said to be the site of coronavirus infections.

The labor actions point to growing concerns about health risks for key workers delivering food and supplies to Americans largely sheltering at home due to the COVID-19 pandemic.

A group calling itself the Gig Workers Collective said it was maintaining its strike call made Friday despite new safety measures announced late Sunday.

"Workers aren't filling orders until our full demands are met," a spokesperson told AFP. "This isn't just about us, we want to also protect our customers."

It was not immediately clear how many of Instacart "shoppers" who are independent "gig" workers, were participating in the stoppage.

The San Francisco-based firm said it would provide new health and safety supplies to full-service "shoppers" and would set a "default" tip based on customers' prior orders.

The labor group, whose numbers were not known, called the Instacart moves "a sick joke."

"We had been asking for hand sanitizer for many, many weeks. But apparently the company is capable of sourcing some with two days of work? Where was this before," the group said in a Medium post.

The blog post said the new tipping policy was unlikely to increase compensation for delivery workers and fell short of demands for "hazard" pay.

Separately, an Amazon worker at a warehouse in the New York borough of Staten Island called for a walkout, claiming the e-commerce giant failed to adequately deal with infected employees.

"There are positive cases working in these buildings infecting thousands," Christian Smalls wrote on Twitter, including videos from the warehouse depicting what he said were inadequate safety measures.

The New York Post reported that about 200 workers were planning to demonstrate outside the facility around 1700 GMT.

Amazon, responding to an AFP query, said Smalls made "misleading" statements about conditions and was supposed to be on quarantine.

"Like all businesses grappling with the ongoing coronavirus pandemic, we are working hard to keep employees safe while serving communities and the most vulnerable," Amazon said.

"We have taken extreme measures to keep people safe."

A separate group of workers at the Amazon-owned grocery chain Whole Foods meanwhile called for a one-day stoppage or "sickout" on Tuesday to press demands for improved health measures.

The group calling itself "Whole Worker" said it was seeking guaranteed paid leave for quarantined workers, among other things.