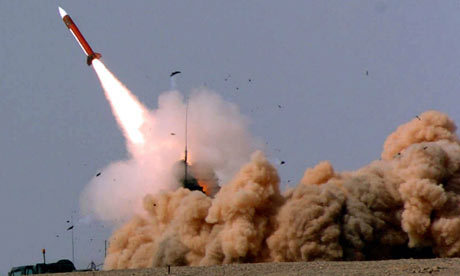 Washington and Baghdad had been negotiating the placement of the defense system since January, when Tehran fired ballistic missiles at the western Iraqi base of Ain al-Asad, which hosts American and other foreign troops.

It was not immediately clear whether the U.S. had ultimately received the Iraqi government's approval.

One of the Patriot batteries was deployed to Ain al-Asad last week and was being assembled, according to a U.S. defense official and an Iraqi military source.

Another battery was deployed to a base in Arbil, the capital of Iraq's autonomous Kurdish region, the US official said.

Two further batteries destined for Iraq were still in Kuwait, the official added.

The Patriot systems are composed of high performance radars and interceptor missiles capable of destroying incoming ballistic missiles in flight.

Iraq had resisted the deployment because it feared its powerful neighbor Iran -- the main regional foe to the US -- would see it as a threat and further ramp up tensions.

Top Iraqi officials who met US Central Command chief General Kenneth McKenzie in February suggested Washington could grant Baghdad some political "cover" by reducing its troop presence in Iraq as it deployed the missiles, a US military source with knowledge of the talks told AFP.

In recent weeks, the US-led coalition has significantly drawn down troop levels in Iraq.

On Monday, the alliance pulled out of a military base in the northern city of Mosul, the fourth location it has withdrawn from this month.

The alliance is also temporarily withdrawing hundreds of trainers as Iraq's military has halted all training since early March to minimize the risk of the novel coronavirus pandemic spreading among its forces.

"The U.S. objective for the Patriots is to protect its troops that are now at a smaller number of bases," a Western diplomat in Baghdad told AFP.

On Monday, Iraq's caretaker prime minister Adel Abdel Mahdi warned against any "offensive military action without the approval of the Iraqi government," but did not specifically mention the Patriots.

The statement from his office also objected to what it described as "unlicensed planes" in various parts of Iraq.

The U.S.-led coalition is required to get approval from the Iraqi government to fly any surveillance drones and planes, but those permissions expired in early January.

The U.S. had kept the drones in the air anyway, a senior American defense official told reporters, after months of deadly rocket attacks on Iraqi bases hosting foreign troops.

Washington has blamed the attacks on Iran-aligned elements of the Hashed al-Shaabi, a military network formally integrated into Iraq's security forces.