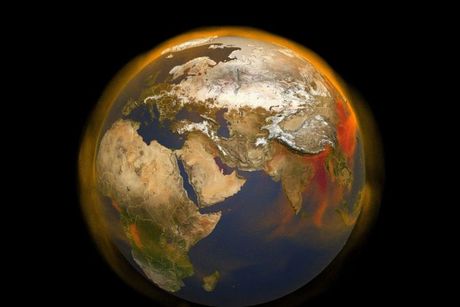 Methane, a powerful greenhouse gas, is leaking from industry sites at rates equivalent to the annual carbon emissions of France and Germany combined, a new analysis using satellite data shows.

"The good news is most of these are man-made and can easily be addressed through action by individual companies, governments and regulators," said Antoine Rostand, CEO of Kayrros, an asset observation platform that conducted the analysis.

The analysis showed methane plumes from just three oil and gas facilities in Algeria were emitting more than 25 tonnes of methane per hour -- equivalent to the CO2 emissions from a 750 megawatt coal power plant.

While methane only stays in the atmosphere a fraction of the time that CO2 does, over a period of decades it is dozens of times more potent as a greenhouse gas.

Overall, greenhouse gas emissions from energy have risen globally nearly every year in the last decade, despite the 2015 Paris climate deal mandating their reduction.

The United Nations says that manmade emissions must decline 7.6 percent annually by 2030 to limit global warming to 1.5C above pre-industrial levels -- the more ambitious cap laid out in the Paris deal.

The analysis has not been peer-reviewed but has been shared with the European Commission.

The International Energy Agency on Tuesday released its assessment of global methane emissions, which found that about 570 million tonnes are added to the atmosphere each year -- around 60 percent of which comes from human activity.

"The ability to identify big leaks by satellite will not solve the challenge presented by methane emissions from oil and gas by itself," the IEA said.

"Tackling them requires companies to pursue and maintain high operational standards, and policy makers to put in place well-designed regulations."

Commenting on the Kayrros project, Gunnar Luderer and Nico Bauer, climate economists at the Potsdam Institute for Climate Impact Research, said that it may overestimate the warming impact of methane leaks.

"Still, however, the annual leakage of 20 Mt of methane from 100 point sources mostly in the energy industry is an astonishing loss that is worth further validation," they told AFP.

They said that the leaks alone were worth nearly two thirds of all natural gas use in France every year, with an industry impact of roughly four billion euros ($4.4 billion).

"Economists would expect that such leakage would be avoided for pure cost reasons," said Luderer and Bauer.

"In any case, regulatory intervention could lead to lower emissions with economic benefit."