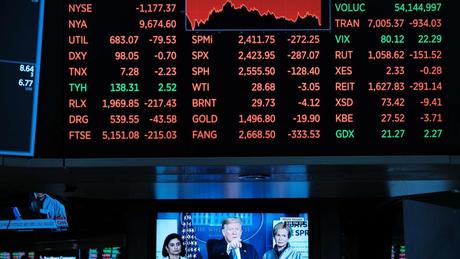 Equity markets fell in Asia on Thursday, tracking a sharp drop on Wall Street as the deadly coronavirus sweeps the planet, with the infection rate fast approaching one million and forcing countries to tighten already strict lockdown measures aimed at containing the disease.

After two weeks of much-needed gains fuelled by trillions of dollars in stimulus and widespread monetary easing, traders' focus has returned to the devastation wrought on populations and the long-term impact of the pandemic.

Donald Trump's COVID-19 task force has warned the US could see almost a quarter of a million deaths and the president warned of a "horrific" couple of weeks ahead.

His sobering comments came as a number of countries said they would extend lockdowns, which have already gouged economies around the world.

Adding to the unease on trading floors was a report saying China had masked the true extent of the virus in the country, which is just coming out of an extended shutdown.

"The incremental news on the virus in the last 24 to 48 hours has been disappointing," John Porter, at Mellon Investments Corp., told Bloomberg TV.

"The global economy has hit a wall, there's a tremendous amount of uncertainty, and that's contributing to the volatility in the markets and the downward trajectory we've seen the last few days."

US and European markets fell around four percent Wednesday, with investors ignoring data showing far fewer private-sector jobs were lost last month than were expected. Eyes are on the release later in the day of US jobless claims figures for last week, which some estimates have put at a mind-boggling 6.5 million.

The selling extended into Asia, with Tokyo ending the morning down 0.8 percent, while Hong Kong dropped 0.5 percent and Sydney shed more than two percent. Shanghai eased 0.1 percent, Singapore fell one percent, while Manila and Wellington were off two percent.

"With the global economy in freefall, markets have gone back to risk-off mode... as investors are struggling to look through President Trump's ominous forecast suggesting Americans could keep dying into June," said AxiCorp's Stephen Innes.

"Now the markets dispute to come up with some alphabet letters to analogise a potential economic recovery. Still, it's going to be anything but a 'V'-shape recovery. That's for sure."

He added that investors were currently a "bundle of nerves".

Crude enjoyed a small rally on hopes for a US intervention to end Saudi Arabia and Russia's price war, which is compounding the effects of battered demand caused by the coronavirus.

Trump said he had held talks with the leaders, adding: "I think that they will work it out over the next few days."

The president will also meet on Friday energy industry executives to discuss the crisis, which is battering the sector, with prices now at near-two decade lows.

ANZ Bank said prices were also being supported by reports that the US energy department might rent space in the country's emergency oil reserves to local producers.

Analysts said, however, that gains are likely to be limited owing to the impact of business shutdowns, the grounding of air travel and other social distancing measures aimed at limiting the outbreak.