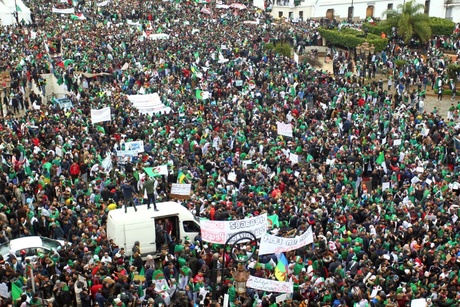 Algerians stuck in pandemic lockdown and dismayed with their government are tuning into an irreverent online broadcaster that is keeping their protest spirit alive: Radio Corona Internationale.

Created in an expatriate's dining room in the United States, RCI offers a cocktail of political talk, caustic humor and popular music to give listeners rare moments of freedom amid the gloom of confinement.

The one-hour show airs live via Facebook on Tuesdays and Fridays, the weekdays when "Hirak" anti-government protesters would take to the streets for the past year until organizers suspended the rallies because of COVID-19.

Its host is well-known Algerian broadcaster Abdellah Benadouda, 49, who fled his homeland in 2014 after falling out with the powerful inner circle around former president Abdelaziz Bouteflika.

"I missed the revolution," says Benadouda with regret, referring to last year's unprecedented popular uprising that ended the two-decade reign of the ailing leader.

Since then, the protests had continued, demanding the wider dismantling of the political "system" that has held a tight grip on the North African country -- until the pandemic put a halt to them last month.

Benadouda said that ever since the Hirak movement started in February 2019, "only my body is here in Providence," the capital of the U.S. state of Rhode Island.

The online station is "a way to reinvent the Hirak in the time of confinement," he said, vowing to keep broadcasting even after the end of the public health crisis that has claimed almost 300 lives in Algeria.

Benadouda is a former public radio journalist and presenter of the offbeat news show "Systeme Dz" on the private channel Dzair TV.

He left Algeria fearing retribution after a dispute with Dzair TV, which is owned by Ali Haddad, a powerful businessman who was seen as close to the Bouteflika clan and who is now in prison for corruption.

RCI operates much like a pirate radio station, with the freedom to interact with its audience and improvise live on air.

Listeners are invited to send text and audio messages for broadcast on the program, which is recorded in a mixture of colloquial Arabic and French, the language of the former colonial power.

"Dear coronists, we give you the floor to tell us about your confinement or ask us questions or criticize us," RCI's Facebook page reads.

It's a "very democratic" concept, said Benadouda, who is also a trained veterinarian, and who now works from a basic home studio consisting of a PC, a mobile phone and a speaker.

"This program is driven by our deepest state of mind: freedom," said the self-exiled journalist.

Contributors include Algerian columnists dispersed as far as Paris and Doha, while the playlist features popular protest anthems and politically sensitive rap.

The program is characterized by comical puns and a jovial tone, but its message is serious -- a recent show was dedicated to Karim Tabbou, an emblematic figure of the anti-regime movement who is now in prison.

Another show discussed the shut-down of online media sites Maghreb Emergent and Radio M, one of whose hosts, Khaled Drareni, has been in preventive detention since March 29, shortly after he had covered an Algiers demonstration.

"It is in adversity that we remain united," Benadouda said on air last Friday.

"The state must understand this."