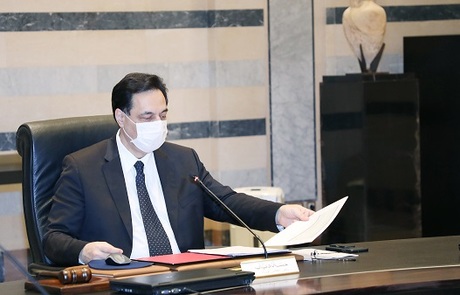 Prime Minister Hassan Diab on Tuesday warned of “political exploitation” of the new wave of anti-government protests in Lebanon, saying there are “indications” of intentions to “shake security.”

“It is normal for the people to take to the streets and explode their anger anew, as they did in the October 17 uprising, especially after they witnessed the presence of political attempts to prevent the government from opening the corruption files,” Diab said during a cabinet session.

“We understand the people's scream against the policies that have led the country into this social, financial and economic situation and we understand the popular demands as to the insistence on holding accountable the corrupts who caused the state of collapse,” the PM added.

And while voicing support for “every democratic expression, especially that which reflects people's pain,” Diab said he strongly rejects “all the malevolent attempts to distort this expression through derailing it and turning it into riots which harm people's concerns and their legitimate demands.”

He also cautioned against “political exploitation of the riots to serve personal and political ambitions, interests and calculations.”

“As I said before, tampering with security stability is prohibited and there should be accountability against these violators and the state won't stand idly by,” he added.

“The attacks on public and private property as well as on the Lebanese Army and its troops in some areas indicate the presence of malicious intentions in the (political) backstage to shake security stability. This is playing with fire and it will burn the fingers of those who want to exploit the people's blood for their own interests,” Diab warned.

He also urged “the Lebanese who are rallying against corruption and corrupts” to prevent “any attempt to hijack their anti-corruption revolution with the aim of political exploitation.”

If you truly understood the poeples plight you would not be sitting on your arse and would be out there rioting for change like them. You have done nothing but issue proclomation upon speech and will continue to do what Syria and Iran tell you to do. A leader does not threaten his people and a leader your not!

What a pos this failed school teacher is. People are starving and it is hunger that is forcing them to be on the streets. Soon the hungry are going to storm your offices, homes, and palaces and drag you on the streets.