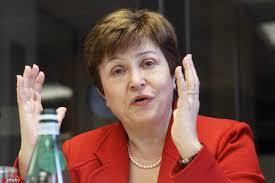 The head of the International Monetary Fund (IMF) said Friday that previous estimates for the world economy to contract by three percent this year were too optimistic.

IMF Managing Director Kristalina Georgieva, during a video-linked conference in Florence, said that worsening indicators in some countries could weigh even further on this forecast.

"Incoming economic data for many countries is below our already pessimistic assessment for 2020," Georgieva said. "And with no immediate medical solutions, more adverse scenarios might unfortunately materialize for some economies."

In April, the IMF warned that the world economy would experience the worst downturn since the Great Depression.

Provided the pandemic were to lessen in intensity in the second half of 2020, however, global growth would rebound by 5.8 percent in 2021, representing a partial recovery, the IMF said last month.

"The unknown behavior of the virus is clouding the horizon for projections," Georgieva said on Friday.

"Assuming that we will have treatments and vaccines by early 2021 at the latest, then we can expect a recovery," she said, cautioning that testing and tracing would have to be on a much larger scale than current efforts.

The coronavirus pandemic has killed more than 270,000 people worldwide, nearly 85 percent of them in Europe and the United States, since it appeared in China in December, according to AFP tracking.