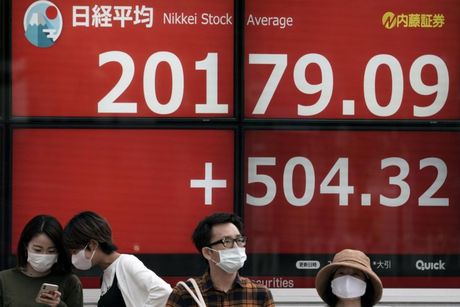 Hopes for a vaccine to treat coronavirus and a further easing of lockdown measures around the world spurred a rally on Asian markets Tuesday as investors tracked a surge across Europe and Wall Street.

A half-a-trillion-dollar Franco-German plan to support the European Union economy also lifted confidence, while Australian investors brushed off news that China had imposed massive tariffs on barley imported from the country.

While the number of infected people is fast approaching five million and more than 300,000 have died, the rates are slowing enough to allow governments to begin opening up their economies after months of economically devastating shutdowns.

Investors are eyeing a gradual return to some semblance of normal in key markets, with major tourist attractions in Italy and Greece reopening, top-tier football back in Germany and the "Big Three" Detroit automakers resuming manufacturing.

But the big news Monday was US biotech firm Moderna reporting "positive interim" results in early testing of a vaccine candidate, with some analysts suggesting that if all goes well it could be in use by the end of the year.

All three main indexes on Wall Street surged between 2.4 and 3.9 percent, with airlines and other tourism-linked firms -- which have been battered by the lockdowns -- soaring.

Tokyo closed 1.5 percent higher, while Hong Kong, Seoul, Singapore, Mumbai and Bangkok were all up more than two percent.

In early trade, London, Paris and Frankfurt extended their rally with more gains having soared Monday.

"The extraordinary policy support, both monetary and fiscal, is combining with greater optimism of an economic rebound," said AxiCorp's Stephen Innes.

"Compared to previous downturns that were more multi-faceted and ostensibly more difficult to unwind, the removal of a single recessionary input (the virus) via a vaccine or more effective treatment can pave the way for fast recovery in output."

Traders were also taking heart from a proposal by France and Germany for a 500 billion euro ($542 billion) fund to finance the recovery of the European Union economy, with the cash going to "worst-hit sectors and regions" in the struggling bloc.

Fresh data Tuesday showed the pain the disease is inflicting, with European auto sales collapsing a record 76.3 percent on-year in April, having dropped 55 percent the month before.

The plan sent the euro surging Monday and it managed to hold on to most of the gains in Asia.

The upbeat mood also saw higher-yielding, riskier currencies rise against the dollar, with the Australian and New Zealand dollars both up more than one percent, while the South Korean won was up 0.7 percent.

And with people now being allowed out of their homes, oil prices continue to rise, with WTI up about 75 percent this month and Brent around 40 percent higher.

National Australia Bank analyst Tapas Strickland said: "The key question from here is can the rally in risk sentiment be sustained? It is possible with more reports of countries/US states easing containment restrictions.

"There is also growing evidence that the global economy troughed in mid-April with high frequency data such as Apple/Google mobility pointing to a pick-up in activity. Sentiment indicators are also now starting to rebound."