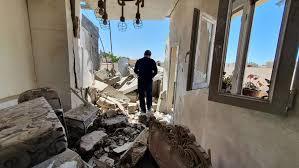 Britain and the United States on Tuesday urged Russia to stop sending mercenaries to the conflict in Libya, after a recent U.N. report confirmed the presence of Russian and Syrian fighters in the country.

Russia dismissed the demands at a Security Council videoconference, however, denying again that Moscow has any role in the presence of Russian fighters in Libya, and calling the UN report unreliable.

He pointed in particular to a private Russian security group, the Wagner Group, which is seen as being close to Russian president Vladimir Putin.

"Wagner Group activities continue to exacerbate the conflict and prolong the suffering of the Libyan people," Allen said.

He also invoked the U.N. arms embargo on Libya that has been in place since 2011, adding: "I want to urge all Security Council members to abide by the resolutions of this Council which they themselves have voted for."

"They must halt the ongoing transfer of foreign military equipment and personnel to Libya, including as the United Kingdom mentioned, Wagner Group mercenaries," she continued.

Their Russian counterpart, Vasily Nebenzia, dismissed the claims as "speculation."

"For the most part, the report is based on unverified or clearly fabricated data, and is aimed at discrediting Russia's policy in Libya," Nebenzia said.

"Many of the data especially regarding Russian citizens mentioned in the report is simply unfounded. There are no Russian servicemen in Libya," he added.

It confirms mercenaries from the Wagner Group are in Libya, and reveals the presence of Syrian fighters from Damascus supporting Marshal Khalifa Haftar.

Haftar, who controls swaths of eastern Libya, launched an offensive in April last year against the capital Tripoli, seat of the UN-recognized Government of National Accord (GNA).

The document also confirms that Syrian rebels are fighting in Libya in support of the GNA, backed by Turkey since late 2019.

The acting U.N. envoy to Libya, Stephanie Williams, has previously told the Council that the U.N. continues to "witness an alarming military build-up as a result of the uninterrupted dispatch by the foreign backers of increasingly sophisticated and lethal weapons, not to mention the recruitment of more mercenaries to both sides of the conflict."