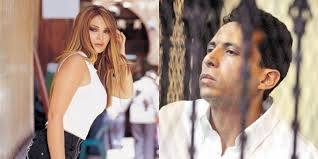 Egypt's president has pardoned thousands of prisoners including a former policeman jailed over killing a Lebanese pop diva more than a decade ago, according to the official gazette.

President Abdel Fattah al-Sisi granted clemency to a total of 3,157 people jailed on different cases on the occasion of the Eid al-Fitr holiday marking the end of the Muslim fasting month of Ramadan.

Among those pardoned was former policeman Mohsen al-Sukkari, sentenced in 2010 to 25 years for the murder of Lebanese singer Suzanne Tamim.

The court had found that Sukkari acted on instructions from Egyptian real estate tycoon Hisham Talaat Moustafa for a payment of $2 million.

The 2008 killing of Tamim, Moustafa's lover, sparked public outcry across the Arab region.

Moustafa, a well-known businessman, was sentenced to 15 years for his part in the crime, but he was granted a presidential pardon in 2017 on health grounds.

He was close to Gamal Mubarak, son of the ousted president Hosni Mubarak who was overthrown in the 2011 mass uprising triggered in part by police brutality and rampant corruption.

what a skunk this Sissi is, the dirtiest people in the world the agyptians are.

A great message for justice in the Arab world

Bless him all this to appease his faith. She had no God after all....

I know i’m off topic But 0.2% deathrate...
Sever influenza a few years ago killed 500,000-650,000 (and these are just the registered ones, no lockdown then why!!!!
This corona BS killed 350,000 and is peaking! and if you fall out of a tree the doctors in Europe and USA label you as a Covid death... this Covid is a Flu like virus and every government of the world is using it to grab power. Wake up!

https://swprs.org/a-swiss-doctor-on-covid-19/
Maybe Diva’s relatives will inflict Justice on this Criminal Killer cop,
But SISI Government WILL Label him another Covid victim.