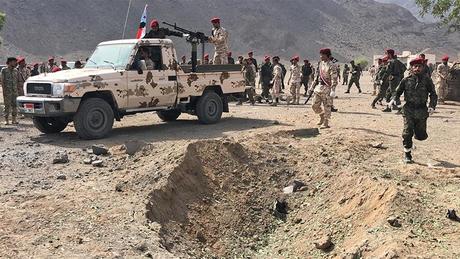 Eight Yemeni government troops were killed and several others wounded in a missile attack by Huthi rebels targeting the army command in the battleground province of Marib, a military official said Wednesday.

In recent months, the Iran-backed rebels have been advancing on government troops in Marib, east of the capital Sanaa, which the rebels captured in 2014 at the start of the long Yemen conflict.

"Huthis fired two ballistic missiles -- one at the army headquarters in Marib province overnight on Wednesday," and the other at a military camp, the official told AFP.

Army chief of staff General Saghir bin Aziz "survived" the attack but his son, a captain, and several others were killed in the missile strike on the army headquarters, the source said.

On January 18, a missile attack attributed to the Huthis killed 118 people and wounded dozens at a mosque in a military camp in Marib.

The Huthis took control of the capital of the northern province of Al-Jawf earlier this year -- a strategic advance that means they now threaten oil-producing Marib province, the source of significant revenue.

The government, backed since early 2015 by a Saudi-led coalition, is fighting the rebels in a conflict that has killed tens of thousands -- triggering what the UN has termed the world's worst humanitarian crisis.

Fighting has continued despite repeated calls for a ceasefire as part of global efforts to combat coronavirus, which is spreading in Yemen in what health agencies fear could become a disastrous outbreak.

Last week, international medical charity Doctors Without Borders (MSF) warned that six years of war had wrecked Yemen's health system and left it facing a "catastrophe" from the pandemic.

MSF said dozens have already died in second city Aden even though the country has reported only some 250 cases and 49 deaths.