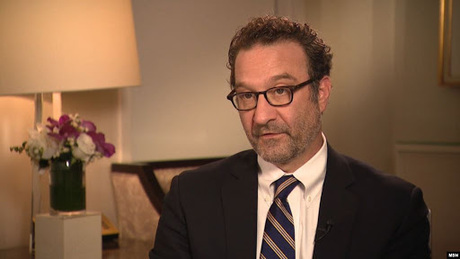 U.S. Assistant Secretary of State David Schenker said the Lebanese government faces immense challenges as the result of years of corruption and the implications of the war in Syria, noting that sanctions could be imposed on Lebanese parties allied to Hizbullah and supporting the government of PM Hassan Diab.

“The Lebanese government faces great challenges including a health crisis as the result of coronavirus pandemic, a financial and economic crisis as a result of years of corruption, mismanagement and the consequences of the war in Syria,” said Schenker in an interview with France 24 late on Wednesday.

“Prime Minister Hassan Diab presented a (economic rescue) plan and we are waiting to see the extent of the government's commitment to reforms and actually implementing them. Only then, we will assess our position to support Lebanon regarding its file with the International Monetary Fund.”

Schenker said the United States could impose sanctions against figures in the political coalition supporting the government of Hassan Diab and allied with Hizbullah.

“Yes, it is possible, and we are examining this. They are allies of Hizbullah and we're going to be looking at a set of sanctions. We hope to apply some of them soon,” he said.

In remarks he made to another media outlet, Schenker stressed that the deteriorating economic and financial situation in Lebanon is not due to U.S. sanctions, but to other factors that he believes have brought Lebanon to where it is.

Lebanon is facing a crippling economic and financial crisis, which has pushed it to default on its overwhelming debt and to officially request assistance from the IMF.

Lebanon is facing a crippling economic and financial crisis, which has pushed it to default on its overwhelming debt and to officially request assistance from the IMF.

Negotiations with the international lender began earlier in May. An essential condition to see these negotiations succeed is that Lebanon fights the endemic corruption and mismanagement draining its economy.

Blease hurry up. We do not like to use the word inshallah as it usually means it is not going to happen. Blease start with bassil, aswad and kanaan

Freeze all of the assets that are in the US for a start and see how quickly they will they will fall...