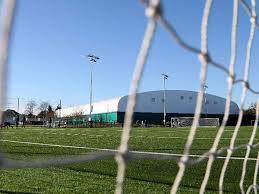 Two Fulham players have tested positive for coronavirus in the latest round of testing, the Championship club announced on Thursday.

The English Football League said tests were carried out on 1,030 players and staff between Monday and Wednesday. Three individuals tested positive from two clubs.

"Those players or club staff who have tested positive will now self-isolate in line with the guidelines provided by the EFL and only those who have tested negative will be permitted to enter training ground facilities," the EFL said in a statement.

Second-tier Fulham announced two of their players had tested positive.

"Both players, who shall remain unnamed due to medical confidentiality, are now self-isolating in line with league and government guidance," the London club said in a statement.

The small number of positive results is a further boost to the Championship's restart plans, with the competition hoping to resume next month.

Votes on curtailing the League One and Two seasons are expected next week.

At Premier League level, four individuals from three clubs were found to be COVID-19 positive in the testing round conducted on Monday and Tuesday, which included 1,008 tests.

Top-flight clubs voted unanimously in favor of a return to contact training on Wednesday and are meeting again on Thursday to discuss wider issues such as the restart date, the rebate to broadcasters, neutral venues and models for how they might cut the season short if the virus means they can't complete all their remaining matches.