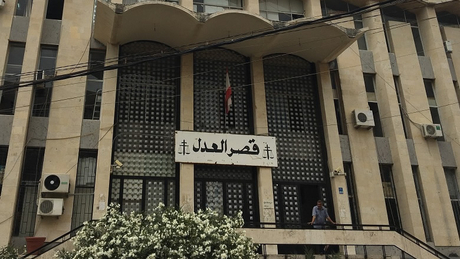 Protesters staged a sit-in on Saturday outside the Justice Palace demanding full implementation of UN Security Council Resolution 1559, and rejecting "Hizbullah’s arms outside the state institutions and the presence of mini-states within a state."

“We reject the presence of mini-states within Lebanon, and we reject illegal arms as well controlling the country's decision,” one activist told reporters referring to Hizbullah.

“Not until Hizbullah approved Lebanon was able to ask for the International Monetary Fund’s assistance for its economic crisis. Can you imagine, we even needed permission to beg,” another protester said.

The activists denounced “domination of the state’s decision,” saying “illegal arms are controlling the country’s will for survival. Resolution 1559 must be fully implemented."

UN Resolution 1559 adopted on 2 September 2004, called upon Lebanon to establish its sovereignty over all of its land and called upon "foreign forces", to withdraw from Lebanon and to cease intervening in the internal politics of Lebanon. The resolution also called on all Lebanese and non-Lebanese parties to disband and declared support for a "free and fair electoral process".

The UN chief has frequently stated that the participation of Hizbullah and other Lebanese groups in the conflict in Syria violates the international resolution.

The UN chief has said, however, that "a free and fair electoral process" would violate the Lebanese Constitution, whose Article 24 guarantees "Christians" that they will get half of seats in the national legislature. The UN chief feels that if this is what Lebanese want, the UN should not interfere. Christians are probably about a quarter of the national population. A census has not been taken since the 1930's.

General Geagea, it's a great honor to meet you, sir.