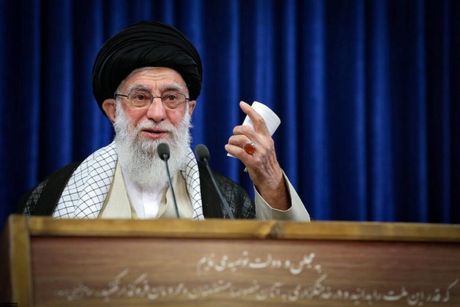 The police killing of unarmed African-American George Floyd shows the "true face" of the United States and its oppression of the peoples of the world, including its own, Iran's supreme leader said Wednesday.

"The fact that a policeman has cold-bloodedly pressed his knee on the throat of a black man until he died and that other policemen watched on without doing anything is nothing knew," Ayatollah Ali Khamenei said in a televised speech.

"It is the true face of America, it's what it has always done all over the world -- in Afghanistan, Iraq, Syria and other countries, and before that in Vietnam.

"It is the normal course of action of the United States, it's the true face of their regime," Khamenei said.

"These are realities that have always been camouflaged or hidden, but they are not new," he said in a speech on the 31st anniversary of the death of his predecessor, Ayatollah Ruhollah Khomeini.

Protests sparked by Floyd's killing by a white police officer in Minneapolis, Minnesota, have raged across the United States for a week and President Donald Trump has ordered the military to intervene.

The once-in-a-generation unrest has coincided with the world's deadliest coronavirus outbreak in the United States.

Epidemiologists have voiced concern that the thousands of people protesting at close quarters, coughing violently when hit by police tear gas, will lead to a new upsurge in infections.

"Thank God, (U.S. leaders) have already been discredited by their actions -- their handling of the coronavirus has discredited and shamed them around the world," Khamenei said of the 106,000 deaths from COVID-19 already registered in the United States.

Iran had itself faced strong criticism from its arch-foe the United States when it was reeling from one of the world's highest COVID-19 death tolls earlier this year.

As of Wednesday, Iran's health ministry declared a total of 8,012 deaths, although that figure has been dismissed by some as underreported, including by Washington.

Tensions between Tehran and Washington escalated sharply in 2018, after Trump unilaterally withdrew the U.S. from a landmark nuclear agreement and reimposed crippling sanctions.

Classic case of the pot calling the kettle black.
This is a tragic event involving one black American, how about the thousands your regime killed during the uprising? Tfeh

Dudes.. don't listen to this curmudgeon.. he's just still pissed at the Amreecanes.. for not considering him for the role of.. Uncle Sam which was being recast... He really really wanted to be.. the new Uncle Sam.. He even put a full page ad in Variety.. and sent in his 8" X 10" glossy headshot.. and a 13x19 wide angle colored picture of himself.. doing the pointing pose we all know and love.. with the caption.. "I've got the beard, I've got the finger, I've got the serious sinister gaze, I am Uncle Sam!".. But they passed.. and he's been holding a grudge ever since... Say what you like.. but I think he would have made a great Uncle Sam.. I wonder if the top hat with the big stars.. would fit over the turban..

He would give up his left nut to be an American but hes just too butt ugly.