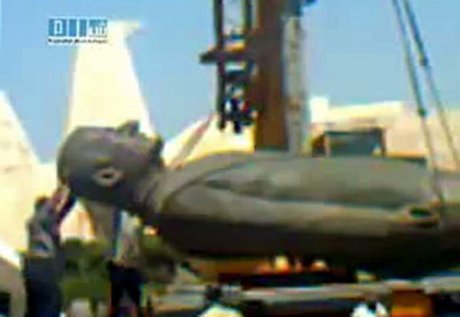 A recap of key dates in the regime of Hafez al-Assad, who ruled Syria with an iron fist for three decades and died on June 10, 2000.

On March 12, 1971, Assad, who leads the pan-Arab nationalist Baath Party, is elected president in a single-candidate poll. He becomes Syria's first head of state from the Alawite sect of the Shiite Islam minority which makes up 10 percent of the population.

On October 6, 1973, Egypt and Syria launch a surprise attack on Israel in the west along the Suez Canal and in the eastern Golan Heights in a bid to try to win back their lost territories from the war in June 1967, but they are repulsed.

In May 1974, a disengagement agreement for the Golan Heights is signed, officially ending the war.

In June 1974, U.S. President Richard Nixon visits Damascus and announces the re-establishment of diplomatic relations with Syria that had been frozen since 1967.

From May 1977, Syrian soldiers, who have taken control of most of the country apart from the border zone with Israel, clash with Christian forces who protest their presence in regions previously under their control.

For three decades Syria will be a dominant military and political force in Lebanon.

In 1979, relations between Syria and Iraq, each ruled by rival branches of the Baath Party, deteriorate after Saddam Hussein, newly in power in Baghdad, accuses Damascus of a conspiracy.

Iraq breaks diplomatic ties with Syria in October 1980 after Damascus supports Tehran in the Iran-Iraq conflict.

In February 1982, the Syrian regime cracks down on an armed uprising by the Muslim Brotherhood in the city of Hama at a cost of between 10,000 and 40,000 lives.

This follows an earlier attack in 1979 when 80 Syrian military cadets, all Alawites, were killed in a hail of gunfire and grenades at their academy in the city of Aleppo. The Brotherhood were accused of instigating the attack.

In November 1983, Assad suffers a heart attack and is hospitalized in Damascus.

He is in a coma for several hours and his younger brother Rifaat tries to seize power in a failed coup. Assad recovers.

A year later Rifaat is forced to leave Syria.

In 1990-1991, Syria's ties with the U.S. begin to thaw, following the collapse of the Soviet Union with which Damascus had signed in 1980 a Treaty of Friendship and Cooperation.

Four years later, in July, Assad makes a state visit to France, the first to a Western country in 22 years. He is warmly welcomed by his French counterpart Jacques Chirac.

This family can rot in HELL!