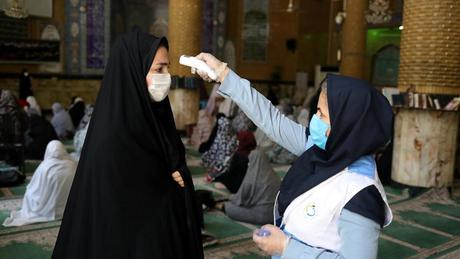 Iran on Thursday announced 134 new deaths from the novel coronavirus took the overall toll in the Middle East's deadliest outbreak past 10,000.

The Islamic republic has struggled to contain the spread of the virus since it reported its first cases in the Shiite holy city of Qom in late February.

Official figures have shown a rising trajectory in new confirmed cases since early May, when Iran hit a near two-month low in daily recorded infections.

But officials deny the upward trend amounts to a second wave.

"We lost 134 of our compatriots in the past 24 hours and the total number of victims is 10,130," said health ministry spokeswoman Sima Sadat Lari.

It was the deadliest day since April 6, when 136 deaths were reported, and the seventh straight day that Iran has reported more than 100 coronavirus deaths.

Lari said another 2,595 people had tested positive for the virus over the same 24-hour period, bringing the country's overall caseload to 215,096.

Hospital admissions were highest in the provinces of Bushehr, Hormozgan, Kermanshah, Khuzestan and Kurdistan, while they were increasing in Tehran and Fars, she said.

"We call on all our compatriots to follow the health protocols, especially the elderly and those with underlying diseases," Lari told a televised news conference.

"We also urge children and young people not to be present in crowded centres, to keep their distance from the elderly, grandparents, and to help them to stay at home as much as possible."

There has been scepticism at home and abroad about Iran's official figures, with concerns the actual toll could be much higher.

On Sunday, Health Minister Said Namaki denied Iran was facing a second wave of infections and said "the peak of the disease has not passed".

"Even in provinces where we think the first coronavirus wave is behind us, we have not yet fully experienced the first wave," semi-official news agency ISNA quoted him as saying.