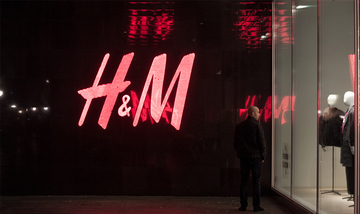 Swedish clothing giant H&M said Friday it slumped to a near 500 million euro second quarter loss as the coronavirus pandemic forced it to close more outlets than planned.

At the height of the crisis in Europe in mid-April, about 80 percent of its shops were shut. Net loss fell to about five billion kronor (477 million euros), H&M said.

"When the majority of the stores were temporarily closed in the second quarter, we focused on redirecting product flow to our digital channels," chief executive Helena Helmersson said in the quarterly report.

In the three months to May, sales overall tumbled 50 percent compared with a year earlier to 28.7 billion kronor but online sales rose 32 percent.

Some 350 shops are currently closed, about seven percent of the global total.

Earlier this year, H&M reported a strong start but warned that it expected a tough second quarter because of the coronavirus crisis.

"The second quarter will naturally be very negatively impacted by the corona situation and will therefore be loss-making," the group said at the time.