Boeing 737 MAX Could Take off Monday for Commercial Survival 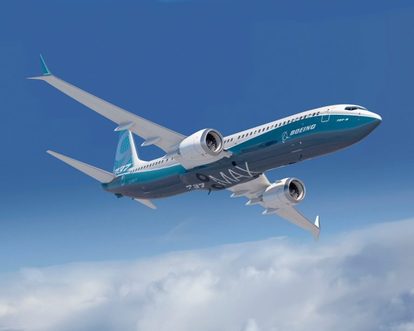 Boeing's 737 MAX plane could take its first test flight from Monday, a crucial step for the survival of the company's star model that has been grounded for 14 months.

Neither Boeing nor the Federal Aviation Administration confirmed the flight when asked for comment on Sunday.

"We continue to work diligently on safely returning the 737 MAX to service. We defer to the FAA and global regulators on the process," a Boeing spokesperson told AFP.

The troubling similarities between the two accidents, both of which occurred shortly after takeoff, along with the pilots' inability to regain control of the plane, led global aviation authorities to ground the model indefinitely.

For months, the US aviation giant has been struggling to get its medium-haul aircraft -- whose sales were its main source of revenue before the grounding -- back into service.

The model's anti-stall flight system, the MCAS, was partially to blame for both crashes. But other technical malfunctions, including one involving electrical wiring, were subsequently detected during the aircraft's modification process, slowing down its recertification.

For weeks, Boeing has been awaiting the green light from authorities to conduct test flights to prove the modifications provide maximum safety.

Civil aviation authorities cannot approve the modified model until they have examined how it performs in flight. They will also look at the thousands of data points collected during the flights.

For this reason, three days of test flights have been planned, according to the New York Times.

They will take off from Boeing Field, just outside Seattle, the manufacturer's birthplace in the northwestern US state of Washington.

The weather is difficult to predict, but forecasts show Monday will be partially cloudy, with little wind and a 10 percent chance of rain.

According to the Times, an FAA pilot will be at the controls to test out the modifications conducted on the plane, and a Boeing test pilot will also be on board.

In general, test flights are meticulously prepared for.

A few months ago, Boeing anticipated the MAX would return to service in mid-2020, around June.

But the coronavirus pandemic, which resulted in travel restrictions and lockdown measures to try and slow its spread, has upset the schedule.

According to The Seattle Times, European and Canadian aviation authorities have demanded substantial new changes to the plane's flight control system.

The two regulators, along with the FAA "have agreed Boeing will be required to make these additional design changes... only after the MAX returns to service," the newspaper reported.

When asked by AFP for further details, a Boeing spokesperson said Friday that safety is the company's top priority.

The spokesperson also said that Boeing is committed to answering regulator questions and meeting all certification and regulatory requirements.

Boeing urgently needs to get the 737 MAX back in the air in order to pull itself out of a historic crisis.

The aircraft accounts for more than two-thirds of the company's order book and is therefore crucial to the mid-term survival of the manufacturer -- which, like the entire aviation industry, is suffering from the effects of the coronavirus crisis.

At the end of April, Boeing released details on a downsizing plan to cut total headcount by 10 percent, or roughly 16,000 employees in all.

In March, credit ratings agency S&P downgraded its rating for Boeing to BBB from A-, moving it into a speculative category.

The additional modifications required by foreign aviation authorities could add substantial costs to the MAX program. They could also slow the increase in deliveries that Boeing would need to rebuild its cash flow.