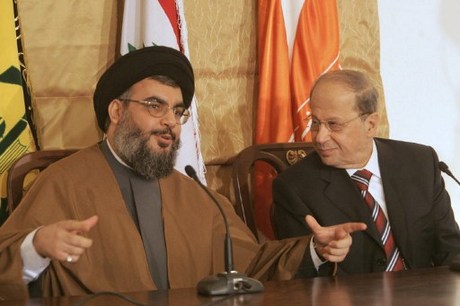 Prime Minister Hassan Diab has inquired about Hizbullah’s stance on the reports and statements suggesting that the government’s departure is imminent and has been told that his government will stay in the foreseeable future, highly-informed sources said.

He was told that he should seek instant solutions that can “ease the popular tensions on the streets to prevent a deterioration,” the sources added in remarks to the Nidaa al-Watan newspaper published Friday.

The sources noted that Industry Minister Imad Hoballah’s statement from the Grand Serail on Thursday had properly reflected Hizbullah’s stance, which is still “clinging to Diab’s government and offering it a cover in the face of the pressures it is being subjected to.”

As for Deputy Speaker Elie Ferzli’s meetings in Ain el-Tineh and the Center House and his calls for changing the government, the sources linked Ferzli’s drive to a deterioration in his relation with Free Patriotic Movement leader Jebran Bassil.

Diab has been also told that President Michel Aoun “will not, under any circumstances, accept to sign the decree of a government led by Hariri, because he would signing the decree of his tenure’s end with his own hand,” the sources added.

The sources also revealed that Aoun had recently dispatched his adviser Salim Jreissati to ex-PM Najib Miqati to explore his stance on the possibility of him forming a government containing Bassil.

Jreissati was told that Miqati “is not ready to endorse such a proposal,” the sources added.

What a mess! Pity the nation...

"Aoun had recently dispatched his adviser Salim Jreissati to ex-PM Najib Miqati to explore his stance on the possibility of him forming a government containing Bassil."

they really really want the revolution to take a violent course so the people hang these crooks.

The President's stance will further anger the Lebanese population. He and his son-in-law Bassil have no regard to the country's plight and sufferings.

It is not a big secret that Aoun is no longer in charge at Baabda. Salim Jreissati and Jebran Bassil are. It's the reason Michel Aoun daughter/adviser Mireille Aoun-Hachem resigned her post and now touts herself only as "مواطنة لبنانية". Bassil knows he has no prospects once the senile deserter is dead and the FPM desegregates and shatters into a half dozen competing factions. He's trying to leverage and consolidate whatever power he's got to secure what he sees as his rightful inheritance. He's doing this by placing close "advisers", no matter how incompetent they are, is key government positions. Bassil's hoping to rely on their continued loyalty once the old man croaks or his senility becomes so blatant his tenure as president becomes untenable. Bassil knows he's in a race again time and fate and is doing the impossible to get what he wants at any cost even Lebanon's future. You can call it Michel Aoun 88-90 2.0.

You, Mr. President and the imp you've got for a son in law will kiss Hariri's ass to come back, because no one, I say, no one is ready to help Lebanon financially unless Hariri is Premier and has a hold on the fucking Shite Duo (may the wrath of God fell upon them)!