In Israeli Settlements, Money is on Annexation Real Estate Boom 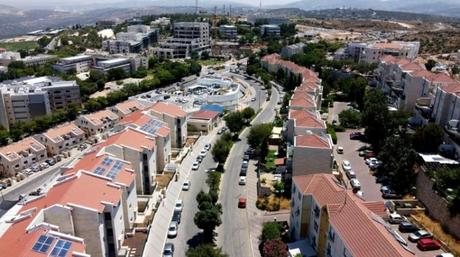 In the Jewish settlement of Ariel, Perri Ben Senior can't wait for Israel to annex this part of the occupied West Bank, hoping it will be a boom for her real estate firm.

With its 20,500 residents, a university and shopping centers, Ariel has been tipped as one of the settlements likely to be included in a first wave of Israeli annexations taking advantage of support from U.S. President Donald Trump.

A controversial peace plan unveiled by Trump in January promised US backing for Israel to annex swathes of the West Bank, including Jewish settlements considered illegal under international law.

"It will raise the price of apartments and land because there will be more demand," she anticipated.

Elsewhere in the West Bank, other agents have seen a leap in sales since annexation began dominating headlines after the launch of the US plan.

Daniel Wach, whose real estate business is in the Eli settlement a short distance from Ariel, told AFP he has done "as much business in the past two months as the last few years".

"We closed six deals in the past 10 days in Alfei Menashe," another nearby settlement.

"The houses have been on the market for many months, so I asked the families why do you want to buy now," he said.

"They fear the prices are going to get higher because of the decision of the government" to annex the territory, he said.

If Israel does annex any parts of the West Bank, those areas will become subject to Israeli civilian law, rather than the military law currently in place.

"It's another reason to come to Judea and Samaria because now they are considered as normal citizens of Israel, it's a normal place now," Wach said, using the Israeli term for the West Bank.

While the details of the plan remain obscure, many assume that annexed lands will not become part of the future Palestinian state, which is also part of Trump's plan.

Currently, "people are afraid to buy in the territories because they say to themselves: 'What if tomorrow we give the territories back? Who will reimburse me? What about the house I bought?" said Ben Senior.

Since the Oslo accords of the 1990s, which were meant to lead to the formation of a Palestinian state, the population of Israeli settlements in the West Bank has more than tripled to 450,000.

In addition to those making their home in the West Bank for religious or ideological reasons, many Israelis have been drawn to the settlements by their housing costs, which are significantly lower than Israel's expensive real estate market.

Just 12 kilometres (7.5 miles) west of Alfei Menashe, on the other side of the "green line" between Israel and the West Bank, lies Kfar Saba.

There, a seven-room apartment on 200 square metres of land would cost around 4.5 million shekels ($1.3 million, 1.1 million euros), Wach said.

A similar property in Alfei Menashe would cost around half of that, he said.

"Immediately after annexation, the prices will jump around 10 to 15 percent up, and in around five, six, seven years from now, it'll go around 30 percent up, not less."

"It's gonna be a big market, we'll need to get ready, work hard for this opportunity."

While Netanyahu has yet to make any concrete annexation moves, despite being able to do so from July 1 under the US plan, Wach can already feel a certain momentum.

"When Israel decides this place is ours, the common reaction is -- ah, finally!" he said.