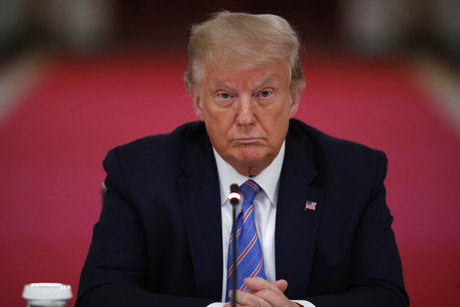 U.S. President Donald Trump has said he disagrees with the assessment of the country's top immunologist, Anthony Fauci, on the dire situation the United States faces as cases of the novel coronavirus continue to spread.

"The current state is really not good," the highly respected Fauci, head of the National Institute of Allergy and Infectious Diseases, said in a Facebook and Twitter livestream on Monday.

"We are still knee deep in the first wave" of COVID-19 infections," he said.

Trump, speaking Tuesday in a TV interview, disagreed with Fauci, a key player on the White House's own Coronavirus Task Force.

"I think we are in a good place," the president said in an interview on the "Full Court Press" news show hosted by a former Fox News anchor, adding: "I disagree with him."

"Dr. Fauci said don't wear masks, now he says wear them," he continued, adding that the immunologist has "said numerous things" that according to Trump were bad advice.

The United States has fared poorly in its handling of the pandemic, with more than 130,000 people losing their lives, the highest death toll in the world by far. Currently there is a surge of cases in the south and the west after regional officials began to relax restrictions.

Trump has downplayed the ever-rising number of daily cases, blaming them instead on increased testing.

The U.S. is currently testing some 600,000 people a day, according to the COVID Tracking Project, but even this is deemed insufficient by health experts because of the very high rate of positive cases being found.

On Tuesday federal officials said they would offer free COVID-19 testing to people without symptoms to stem a surge of cases in three southern hotspots.

in three months we will approach one year of Corona. which I think the deaths will be around 600,000

The common flu causes up to 5 million cases of severe illness worldwide and kills up to 650,000 people every year,

Why is not a lockdown done for the Rihnovirus (Flu Virus) every year...

You can see the deaths they are the same rate... BUT

keep in mind how the WHO and CDC Fauci Lie

I mean China India way more compact in Population Density yet compared to the USA (4.5% of the world Population) has a Quarter of all World Deaths...

HOW--- Especially in the USA and Brazil...
Car Accident Death = Corona
Cancer = Corona
Fell off a Building and Died = Corona
Heart Attach = Corona
Not sure = Corona...
CDC guidlines have specifcly being amended to make this Corona reporting exactly like that...
So 500,000 Deaths????? NO I don't think so the FLU still takes first portion here..

actually another 4 months ... Cases of Covid anti bodies in people were found in france as far back as December !!! or
November... https://www.msn.com/en-us/news/world/the-first-covid-19-case-originated-on-november-17-according-to-chinese-officials-searching-for-patient-zero/ar-BB119fWJwell more than three months...

*sigh* @lebcan. COVID-19 has taken half a million lives despite a global lockdown and other tough safety measures like social distancing and PPE. There’s also currently no medication or vaccination for it. I don’t care to engage in an online spat with you, but here’s my advice, take this seriously and stay vigilant in the fight against this coronavirus, stop reading into conspiracies and instead listen to what the scientists have to say, and regarding influenza, do your part and get vaccinated every year.