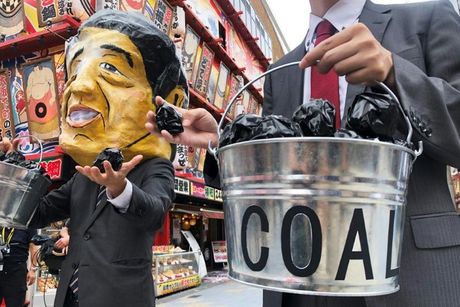 Japan said Thursday it would tighten rules for investment in foreign coal-fired power stations on environmental grounds, but stopped short of ending government funding for projects.

The move comes with the world's third-largest economy under fire for financing projects to build coal plants at home and abroad -- notably in Southeast Asia.

Economy, Trade and Industry Minister Hiroshi Kajiyama told reporters the government "has decided to tighten" the rules for supporting investment.

Countries seeking investment would be required to change their "behavior" towards decarbonization, Kajiyama said, but added that the new policy was not about cutting back funding.

"There are developing nations in the world that can only choose coal as an energy source," he said.

Further details were not immediately available.

The government currently provides funding to Japanese companies if their projects meet certain criteria -- such as when a foreign country has no options but to choose coal due to economic reasons.

The Global Energy Monitor watchdog said last year that Japan accounted for over US$4.8 billion in financing for coal power plants abroad -- particularly in Indonesia, Vietnam and Bangladesh.

"The coal-fired power stations were the pillar of infrastructure exports for Japan," she told AFP.

But Greenpeace criticized the decision as falling short, saying it showed "no clear policy."

Japan has some 140 coal-fired power stations, providing nearly one-third of the nation's total electricity generation, and second only to LNG-fired plants.

But there are more than a dozen projects underway to build more plants -- despite efforts to phase them out in many other parts of the world.

Japan wants nearly a quarter of its energy needs to be met by renewable sources -- including wind and solar -- by 2030, a figure critics describe as unambitious based on current levels of around 17 percent.