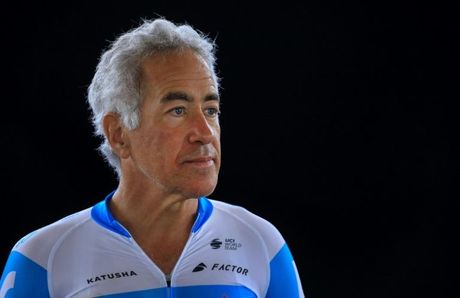 He has ridden in a cycle rally in the Emirates, recruited star cyclist Chris Froome to Israel's Tour de France team and was mentor to the first Israeli Formula One driver.

Israeli-Canadian billionaire Sylvan Adams is playing the sports card to try to change the image of Israel as mired in conflict and to promote its normalization with the Arab world.

"The Israel that I know and love is not the Israel that is often shown in the media," he said. "So I feel that there is a very distorted image of Israel."

His latest coup came with the announcement Thursday that Froome would at the end of this season join his Israel Start-Up Nation cycle team, the first Israeli squad set to compete in the Tour de France, which Froome has won four times.

Adams, himself a keen cyclist, arrived for an AFP interview on a competition bike, his round sunglasses veiling azure eyes.

For the camera, he rides a few laps around the wooden-floored velodrome he has had built to international standards in Tel Aviv, the only one in the Middle East.

Born in Quebec, the real estate tycoon immigrated to Israel five years ago, learned Hebrew and established himself as a go-to guy for pro-Israel "soft power".

Forget the conflict, the wars -- Adams prefers to talk about the economy, start-ups, democracy, tolerance and also getting positive publicity for the Jewish state, where he is returning to his roots.

Bringing football superstar Lionel Messi to Tel Aviv last November was his doing, as was the Giro d'Italia bicycle race in Jerusalem in 2018.

When the Williams Formula One racing team in January announced French-Israeli Roy Nissany as its new test driver, Adams described himself as president of the Roy Nissany Formula One management group.

"I'm trying to appeal to very large audiences" said Adams. "I don't want to convince people one at a time. It's just too slow and I'm too old."

As an example he cites a "billion" viewers in 2018 for the stages of the Giro in the Holy Land.

Sport to build bridges between nations? It is a cause in sync with Israeli foreign policy which seeks in particular to forge links with the Gulf monarchies.

He said he was invited to meet Sheikh Nasser bin Hamad Al Khalifa, a son of Bahrain's ruler and also a cycling enthusiast.

"I went to the palace. We had a private meeting. I told him about the velodrome and sent him an invitation," he said.

Yet nothing in his past seemed to foretell Adams having a ringside seat at these Middle East events.

His father, Marcel Abramovich, fled the Nazi labor camps in Romania, to Palestine, then under British rule, which he quickly left for France and then Quebec, at the turn of the 1950s.

An employer there became alarmed at the cost of long-distance telephone calls with traders during which Abramovich would slowly spell out his Romanian Jewish surname letter by letter.

He anglicized it to Adams, cutting the boss's phone bill and following in the tracks of many migrants.

He met his wife of 36 years in Israel where they were both volunteers on a kibbutz collective farm.

He had previously visited the Jewish state as a young man with his parents and they had relatives from Romania who had settled there, and so he said he grew to know and love the country.

One cold, dark Montreal afternoon he arrived home with an idea.

"I came home and I said to my wife, 'what do you think about moving to Israel?'"

After a week in Tel Aviv, the tycoon printed a new business card which read: "self-proclaimed ambassador to the state of Israel."