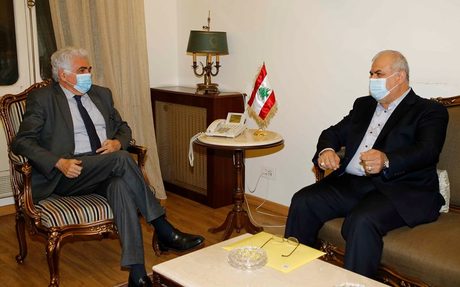 Hizbullah chief Sayyed Hassan Nasrallah had mentioned in a recent speech that the bloc would do such a move.

"We asked Minister (Nassif) Hitti to take the measures that he sees appropriate to rein in the U.S. ambassador's behavior, statements and meddling in our domestic affairs," bloc chief MP Mohammed Raad said at the Foreign Ministry.

"The ambassador must stop interfering in our internal affairs and she must stop the rhetoric that incites the Lebanese," Raad added.

"In the name of the Loyalty to Resistance bloc, we lodged with Minister Hitti an official protest letter against the statements and violations of the U.S. ambassador," the lawmaker went on to say.

"We consider that respecting diplomatic rules and norms would reflect positively on the reputation of the ambassador and those whom she represents," Raad added.

During a recent interview with Saudi-owned news channel Al-Hadath, Shea said that the United States had "grave concerns about the role of Hizbullah," describing it as "a designated terrorist organization."

"It has siphoned off billions of dollars that should have gone into government coffers so that the government can provide basic services to its people," she charged. "It has obstructed some of the economic reforms the Lebanese economy so desperately needs," she added.

Well then, where the hell is our money!

I guess they don't like the truth, and settle into 'we are the resistance' mode. They are resisting Lebanon more than anything else.

According to the Jerusalem Post, israel identified 28 Hezbollah launch sites located next or within factories, schools, mosques . This is shocking, they re doing with under their fake independent government lead by Hassan Diable.