Liverpool to Lift Premier League Trophy on the Kop 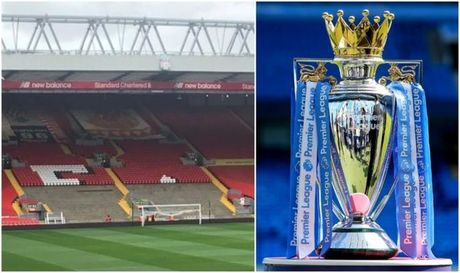 Liverpool will lift the Premier League trophy on the famous Kop stand at Anfield after their final home game of the season against Chelsea on July 22.

Kenny Dalglish, who was the Reds' manager the last time they won the English top flight 30 years ago, will hand out the medals to players and staff.

With no fans able to attend due to the coronavirus pandemic, Liverpool said the idea for the trophy lift was to honor the club's fans.

"With supporters unable to attend the behind-closed-doors fixture, the historic occasion will involve a unique presentation designed to acknowledge and celebrate Liverpool fans," Liverpool said in a statement.

"Reds players and staff will collect the Premier League trophy and their winner's medals on a special podium built at the center of the Kop surrounded by fan banners."

The match will be broadcast on a free-to-air channel to encourage supporters to stay at home for the occasion rather than crowding around Anfield.

Liverpool manager Jurgen Klopp has urged fans to respect social distancing measures after thousands gathered around the club's stadium and in the city center following their coronation as champions last month.