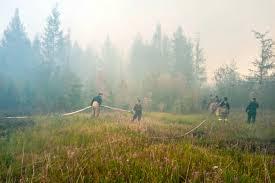 A heatwave in Siberia that saw temperature records tumble as the region sweltered in 38-degree Celsius highs was "almost impossible" without the influence of manmade climate change, leading scientists said.

An international team of researchers found that the record-breaking warm period was more than 2C hotter than it would have been if humans had not warmed the planet through decades of greenhouse gas emissions.

The five hottest years in history have occurred in the last five years and there's a better-than-even chance that 2020 will be the hottest ever recorded.

Earth's poles are warming faster than the rest of the planet, and temperatures in Siberia -- home to much of the world's carbon-rich permafrost -- were more than 5C hotter than average between January and June.

"This is further evidence of the extreme temperatures we can expect to see more frequently around the world in a warming climate," he said.

The impact of climate change on extreme weather events such as super storms and droughts is now well-established, but until fairly recently scientists have been unable to definitively link an individual event to global warming.

As part of a growing area of climate research known as attribution science, the team ran computer simulations of temperatures with the climate as it is today -- around 1C hotter than the pre-Industrial era baseline.

They then compared this to a model generating temperatures over Siberia this year without human influence -- that is, without the additional manmade 1C.

They found that the prolonged heat would happen less than once every 80,000 years without human induced climate change.

This makes the heatwave "almost impossible in a climate that had not been warmed by greenhouse gas emissions", the team said, adding that carbon pollution had made the extreme event at least 600 times more likely to occur.

The team behind the calculations stressed that the Siberian heatwave was a problem for the entire globe.

Some 1.15 million hectares of forest going up in flames released millions of tonnes of CO2 into the atmosphere. At the same time, the wildfires and sustained heatwaves accelerated the region's permafrost melt.

This caused an oil tank built on frozen soil to collapse in May, leading to one of the region's worst-ever oil spills.

Russia's aerial forest protection service, the agency that specializes in forest fires, said Wednesday that more than 5,000 people are working on 197 fires across Russia in an area of over 40,000 hectares, including eight in nature reserves.

"Such a prolonged heat wave is important, not only for its influence on people, but also from a scientific point of view," said Olga Zolina, from Russia's P.P. Shirshov Institute of Oceanography.

"The arctic is very, very important generally for forming of weather and circulation. So such high temperatures are really important for the whole globe."

While the research was compiled rapidly and has not yet been subjected to peer-review, authors said it produced "among the strongest results of any attribution study conducted to date."

The 2015 Paris climate deal commits nations to capping temperature rises to "well-below" 2C (3.6 degrees Farenheit) above pre-industrial levels and to strive for a 1.5C limit if at all possible.

With just 1C of warming so far, Earth is already buffeted by record-breaking droughts, wild fires and super storms made more potent by rising sea levels.

To keep in line with the 1.5C target, the United Nations says global emissions must fall by 7.6 percent every year this decade.

Sonia Seneviratne, from ETH Zurich's Department of Environmental Systems Science, said the research showed the heatwave was an example of "extreme events which would have almost no chance of happening" without manmade emissions.