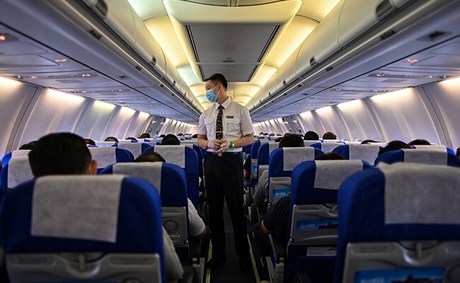 Emirates airline said Thursday it was unrealistic to establish social distancing on aircraft by leaving seats empty to curb the spread of coronavirus, as the cost would be too high to bear.

The Middle East's largest carrier, which operates a fleet of 270 wide-bodied aircraft, halted operations in late March as part of global shutdowns to help contain the virus.

Emirates resumed operations two weeks later on a limited network and plans to fly to 58 cities by mid-August, down from about 157 before the crisis.

"All this talk about social distancing inside the aircraft is nice," Boutros Boutros, Emirates' head of corporate communications, told a business conference in Dubai. "But... we would like to go back to normal."

"The economy of the aircraft is built on filling it, filling the seats," he said. "Having the space (empty) I don't think is going to be an option unless the passenger is willing to pay."

"What we wish for is one thing, but the reality is another."

The carrier has been forced to cut a tenth of its workforce in layoffs that could rise to 15 percent, or 9,000 jobs.

Its president Tim Clark has said that it could take up to four years for operations to return to "some degree of normality."

Dubai Airports CEO Paul Griffiths told that the conference that the impact on the city's international airport was "rapid" and "dramatic."

"We went from 1,100 flights on a typical day, 280,000 passengers, down to 17 flights in the space of three days," he told attendees, whose chairs were spaced far apart under social distancing guidelines.

He said that 44,000 passengers had gone through the airport in the entire month of May, about the same "that we normally experience... in four hours."