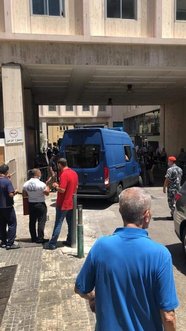 The prestigious American University of Beirut Medical Center has decided to lay off around 850 employees belonging to its nursing and administrative cadres, media reports said on Friday.

A number of employees meanwhile staged a sit-in outside the medical center in Hamra after they were summoned to the administration to be informed of the termination of their services.

Some of the laid off employees expressed grief and broke out in tears as others voiced anger, lashed out at political leaders and blocked the road in protest.

Speaking to TV networks, some employees said the administration cited the dire economic situations in the country and recent embezzlement in the medical institution.

Others meanwhile decried the meager financial compensations that they have been paid, as some voiced concern over the fate of the health care that AUBMC had been providing to ill members of their families.