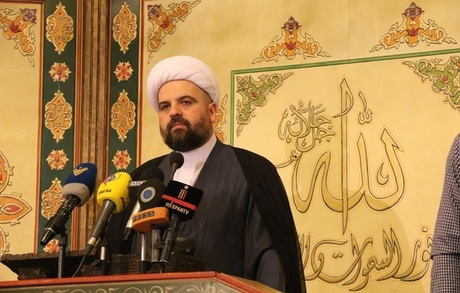 Grand Shiite Jaafarite Mufti Sheikh Ahmed Qabalan said on Friday that neutrality in Lebanon is “impossible because it is inapplicable.”

He said: “Part of wars in the region are not far from Lebanon,” referring to the war in neighboring Syria, “which confirms that Lebanon is in the eye of the storm. It can not be neutral, on the contrary it must be an active partner to defend itself and its interest, otherwise it could be an easy prey.”

Qabalan’s comments arise after the calls of Maronite Patriarch Beshara el-Rahi to neutralize Lebanon from regional conflicts. This, drew different reactions from political parties in Lebanon.

On Lebanon’s multiple crises including a crunching economic and financial crisis, Qabalan said the situation is “historically catastrophic at all levels in Lebanon,” accusing “some parties of making it worse.”

“We suffer from despair, exhaustion, and a comprehensive blockade in Lebanon amid a crisis of power, hunger dealers, high prices of goods and monopolization. The country faces societal and moral disasters. A frightening shortfall in the authority’s ability is revealed amid the total absence of conscience. I invite everyone not to fall in the trap of the international regional project that tightens the blockade on our country,” said Qabalan.

Enough is enough!
Let's turn this country into a Federation, just like the Emirates, and everyone can administer his territory the way he wishes to!

This guy should just say that he is being paid by Iran and kizb to propagate its propaganda. This is just too obvious. He should be a RELIGIOUS leader and stop talking about politics, and SYRIA is not a friend. Never has been, never will be, but allied with Iran so he like saying they are.

It's certainly no coincidence that the only regimes calling for a perpetual state of war with Israel over Palestine are those who are simply abusing it to obtain some sort of legitimacy in the Arab world. One is the Assad dictatorship and the other is non-Arab Iran with its regional militias.

I agree, its impossible until you and the rest of the shiah-leadership is thrown, and real patriotic leaders from your emerges.

Sheikh Qabalan's arguments are 100% wrong and dangerous, and must be totally rejected.

Neutrality has nothing to do with defense. Can't these guys open a dictionary? You can defend yourself but not take sides in regional conflicts. Switzerland is neutral but still has an army.

Despite having a Shia majority, Lebanon's constitution assigns half the seats of its legislature to Christians. No census since 1934, I think Wiki says. Article 24, on line.
European/US news only will tell you that Lebanon's President must be Christian, premier, Sunni, speaker of the house, Shia. That is European-US "stability". This is the blockade that paralyzes Lebanon.
It is exactly in sync with Israel's constitution which reserves power in Palestine to the Jewish minority.
The two states are locked together in a federation of racism.