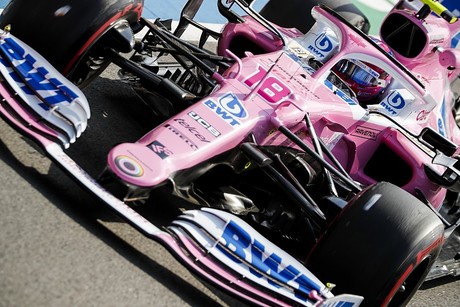 Formula One commissioners will hear Renault's complaint against Racing Point on Wednesday, according to sources on the sidelines of Sunday's British Grand Prix.

The hearing will not necessarily be decisive, the sources told AFP.

Renault has lodged a series of complaints with the International Automobile Federation (FIA) accusing Racing Point of copying elements of this season's cars directly from the Mercedes that won the world championship last year.

Nicknamed the "pink Mercedes", the Racing Points have recorded much improved results so far this season.

The French team say they also believe that there has been an exchange of data and design between Mercedes and Racing Point.

As Racing Point's engine manufacturer, Mercedes was legally able to provide its customer with its brake scoops, which at the time were exchangeable, last year.

But F1 regulations have changed and teams must now use parts that they have designed and are barred from out-sourcing design to a competitor.

A decision will take seven days and both Racing Point and Renault will have the right to appeal.