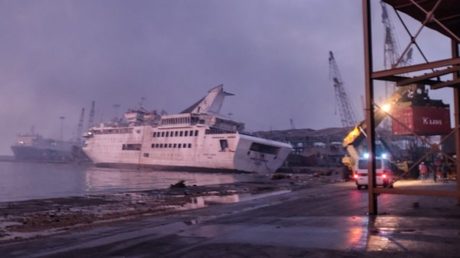 The Lebanese owner of a cruise ship that was sunk by the huge explosion that destroyed the port of Beirut is filing a lawsuit, the National News Agency said Friday.

Two crew members of the Orient Queen were killed and seven others wounded Tuesday when a huge shipment of ammonium nitrate caught fire and caused an explosion that leveled the port and gutted entire swathes of the city.

"Entrepreneur Merhi Abou Merhi, the owner of the Orient Queen cruise ship, has filed a lawsuit against all those responsible for this catastrophic blast," the agency said.

The state agency said the suit was the first of its kind and could pave the way for similar legal action in the coming days and weeks.

The large cruise ship, which can accommodate at least 300 guests and houses a casino, was docked in its home port when disaster struck.

The provisional death toll for the explosion is 154 but the figure is expected to rise since dozens of people are still reported missing and large numbers of injured are still hospitalized in critical condition.

Each citizen should be suing this corrupt government, and each minister (and ex-minister) for personally being responsible for this disaster.

Where are the guillotines? Come on!

the atack came from the sea...

As usual you are talking rubbish

Merhi abou Merhi is a notorious drug dealer, he uses the cruise ship for money laundering purposes. He is very close to Hizballah..... and can thank them for sinking his ship.

Tric.portugal: you are a sectarian idiot. Chinese provocateur ?

You have every right to sue this government, but payments most come from the party that is responsible of this disaster.

Those responsible for the blast are judgement proof.