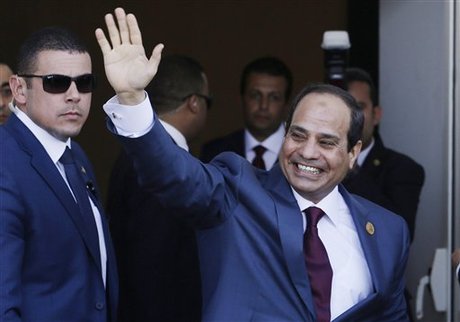 Egyptian President Abdel Fattah al-Sisi on Thursday praised the U.S.-brokered deal between Israel and the United Arab Emirates that would halt Israeli annexation of Palestinian land.

"I read with interest and great appreciation the joint statement between the United States, the brotherly United Arab Emirates and Israel concerning the halt of Israel's annexation of Palestinian land," Sisi said in a tweet, adding that this would help bring "peace" to the Middle East.

The deal would make the UAE only the third Arab country Israel has diplomatic relations with after Egypt and Jordan.

As part of the deal, Israel has agreed to "suspend" plans to annex Jewish settlements and other territory in the occupied West Bank, according to a joint statement from the U.S., UAE and Israel tweeted by Trump.

"I appreciate the efforts of the architects of this agreement for the prosperity and stability of our region," Sisi said.

In 1979, Egypt and Israel signed the first-ever peace treaty between the Jewish state and an Arab nation, upturning Middle East diplomatic and military relations.

Egypt has long served as a mediator between Israel and the Palestinian Islamist group Hamas that controls the Gaza Strip.

Samir 8 you are the face of a real war monger. you will prefer to keep war between Lebanon to Israel rather than return Lebanon into sanity and prosperity. You prefer to be the tail of Iran and their evil messengers Hezbollah, which brought to Lebanon only war, missery and destruction. Israel's existance is a fact, you are not able to change it. all those who tried are licking their wounds.

stop writing crap, do you ever think before you write something. or you just follow your Israeli employer media release forms. you Zionist killer

We done Mr Sisi....let us give peace a chance. The last 50 years of war has achieved ZERO. Only misery for all sides concerned. We owe it to ourselves to try live in peace at least if not love.