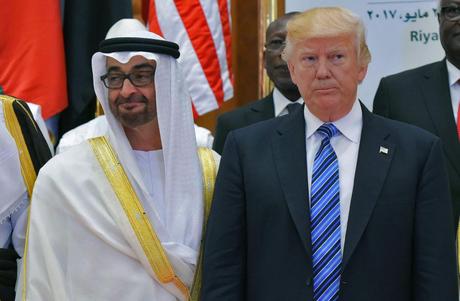 World leaders voiced hope Friday that a historic deal between the UAE and Israel could kickstart moribund Middle East peace talks, even as the Palestinians and their supporters denounced the move to normalize ties as a betrayal of their cause.

Announced by U.S. President Donald Trump on Thursday, it was only the third such accord Israel has struck with an Arab country, and raised the prospect of similar deals with other pro-Western Gulf states.

The deal sees Israel pledge to suspend its planned annexation of Palestinian lands, a concession welcomed by European and some pro-Western Arab governments as a boost for hopes of peace.

But Prime Minister Benjamin Netanyahu stressed Israel was not abandoning its plans to one day annex the Jordan Valley and Jewish settlements across the occupied West Bank.

News of the agreement was broken by U.S. President Donald Trump, in a tweet hailing a "HUGE breakthrough".

He said leaders from the two countries would sign the deal at the White House in around three weeks, evoking memories of previous U.S.-mediated Middle East accords.

The Palestinian leadership rejected the deal as a "betrayal" of their cause, saying they would withdraw their ambassador from the Emirates.

In the West Bank city of Nablus, people set fire to pictures of Sheikh Mohamed, Netanyahu and Trump.

In Ramallah in the West Bank, office worker Jihad Hussein, said: "The Palestinian people have been stabbed in the back by the Emirates leadership."

"But neither this agreement nor anything else will undermine our will to fight for the freedom and independence," he added.

Establishing diplomatic ties between Israel and Washington's Middle East allies, including the oil-rich Gulf monarchies, has been central to Trump's regional strategy to contain Iran, also an arch-foe of Israel.

Tehran on Friday condemned the deal as an act of "strategic stupidity" that would only strengthen the Iranian-backed "axis of resistance."

Under the deal, Israel and the UAE "agreed to the full normalization of relations between Israel and the United Arab Emirates," according to a joint statement Thursday evening by Trump, Netanyahu and Sheikh Mohamed.

Sheikh Mohamed quickly stressed in a tweet that an agreement has been "reached to stop further Israeli annexation of Palestinian territories."

But Netanyahu insisted shortly afterwards that he had only agreed to delay, not cancel, the annexations, that the plans remained "on the table" saying he would "never give up our rights to our land."

Among other U.S. allies in the Gulf, both Bahrain and Oman put out statements backing the normalization deal.

The European Union said normalization would benefit both Israel and the UAE, but foreign policy spokeswoman Nabila Massrali stressed the bloc's commitment to a two-state solution.

"We are, of course, ready to work on the resumption of the negotiations between the Israelis and the Palestinians," she said.

Turkey's President Recep Tayyip Erdogan, a longtime critic of Israel and frequently at odds with western powers, threatened to suspend diplomatic relations with the UAE or withdraw Ankara's ambassador.

German Foreign Minister Heiko Maas said normalization of ties between the two countries was "an important contribution to peace in the region".

There was no immediate word from regional heavyweight and Emirati ally Saudi Arabia.

The controversial Trump plan, unveiled in January, had offered a path for Israel to annex the Jordan Valley and Jewish settlements across the West Bank, communities considered illegal under international law.

The Palestinians had rejected the plan outright as biased and untenable, as did Israel's Arab neighbors, and it sparked fears of further escalation in a tense region.

U.N. chief Antonio Guterres said he hoped Israel's suspension of annexations under the plan could help realize a two-state solution with the Palestinians.

Annexation would "effectively close the door" on negotiations between Israeli and Palestinian leaders and "destroy the prospect" of a viable Palestinian state, he said.

The deal marks a major foreign policy achievement for Trump as he heads into a difficult campaign for re-election in November.

Lebanon shall be next. Down with Hizbullah

Actually it is "Lebanon should be next".
However whilst Hizballah keeps its guns pointed at the heads of the politicians and the army there is no chance of this happening.
Does anyone really believe that Nasrallah cares a s..t about the Palestinians?

Lebanon will not be next no matter what you think. Israel can only sign peace with Dictatorships. When these dictatorships are replaced with democracies and this will happen sooner or later, these agreements will not be worth the papers they are written on. And no bigjohn, the Hezb is not the answer. It is unfortunately part of the problem that made us into a failed state.

ArabDemocrat, you're wrong. Egypt was democratic for a short while, and the Muslim Brotherhood came to power, and Morsi chose not to nullify the agreement, since even he understood it only does good for Egypt. Peace is always preferable to war.

Nope it won't be. Lebanon is not only fascist glorifying villagers. Y'all are a small portion of the lebanese society. And when will you be taking down hizbullah exactly? waiting on israel? If israel wanted hizbullah gone then they would have gotten rid of them, especially years ago before hizbullah gathered so much power, battle experience and weapons. But yeah keep counting on israel to get rid of them for you lol. And as for right wing villager fascists, they have already proven to not be able to do anything other than write nasty comments and begging for help from macron, trump, israel, anyone they deem to be the cool foreigner. So who are you counting on exactly? Zero action and all talk is the description of useless good for nothing people. Keep cheering for nothing as if uae and israel weren't inofficially normalized before this. Village fascists without any power are really really pathetic haha

As much as the Middle East is desperate for peace and development I am afraid that anything Trump touches has to be regarded as poisonous as he's only interested in votes and money Israel will provide the votes and the UAE the money. The Arab nation whatever is left of it will be further fragmented with no direction, purpose or leadership. The poor Palestinians are so far down the pecking order that in reality no one really cares about them.

Lol speak for yourself, not for the middle east. As if the middle east only gets to pick between being dogs of israel and dictator arab regimes or dogs of iran. The slave mentality reeks here. You seem to always be looking for a strong man to serve. Always looking for a dictatorship to lick the boots of hence why you can only see black and white thinking i.e either we are with the UAE dictatorship whos leader tried to stop his wife from leaving and doesnt allow free press nor democracy or with the iranian dictatorship. Village mentality at its best. President Trump is a businessman, he doesn't give a damn about you and the people of the middle east.

Word is that Bahrain and Oman are next. Lebanon will have to wait.

Israel has offered to sit down with the Palestinians on many occasions since 1967, but every single time they have refused to sit and talk. They are a lot more interested in "Pieces of Israel" rather than "Peace with Israel". Many other Arab States have begun realising that the Palestinians have ruled themselves out of being a partner for peace and have simply begun ignoring them.

Sit and talk while continuing to colonize Palestinian land! Phillipo stop using standard radical israeli talking points. The reality is that it is Israel that is cutting Palestinians and their land to pieces. The reality is that the current government is interested in imposing a humiliating agreement on Palestinians. International law is clear. West Bank, Gaza and East Jerusalem are occupied territories. Palestinian refugees have the right to return (even though the PLO has indicated on several occasions that it will accept a very limited right of return). Israel can only make deals with Dictators and these agreements will last as long as the Arab people are in bondage.

"both Bahrain and Oman put out statements backing the normalization deal."
"The Palestinian leadership rejected the deal"
It must be good, otherwise the Pslestinian "leadership" wouldn't be rejecting it.
They have never missed an opportunity to miss an opportunity.

ArabDemocrat.com "International law is clear. West Bank, Gaza and East Jerusalem are occupied territories."
Could you please inform us ignorant people EXACTLY when were these teritories occupied from the Palestinians? To occupy a territory, it must have previously been part of another country. It is most interesting to note that from 1948 to 1967 when these territories were occupied by Jordan and Egypt not a single claim was made.

The international court has already ruled that they are occupied. Go hide in your hole. You are either ignorant or a paid troll.

And phillipo ... you keep repeating stock propaganda point repeated by the radical right in Israel and their supporters. No one with a brain use these anymore because they are trash devoid of substance. Play on words. Fogging issues. Blaming the victim. I met your likes when in University. Usually they grow out of it!

In 2004, an advisory opinion by the International Court of Justice concluded that Israel had breached its obligations under international law by establishing settlements in the West Bank, including East Jerusalem and that Israel cannot rely on a right of self-defence or on a state of necessity in order to preclude the wrongfulness of imposing a régime, which is contrary to international law. In its 2004 advisory opinion on the Legal Consequences of the Construction of a Wall in the Occupied Palestinian Territory it states, at paragraph 120, that Article 49(6) "prohibits not only deportations or forced transfers of population…but also any measures taken by an occupying Power in order to organize or encourage transfers of parts of its own population into the occupied territory."

All 13 judges were unanimous on the point The Court also concluded that the Israeli régime violates the basic human rights of the Palestinians by impeding the liberty of movement of the inhabitants of the Occupied Palestinian Territory (with the exception of Israeli citizens) and their exercise of the right to work, to health, to education and to an adequate standard of living

"Occupied Palestinian Territory"
For this comment to be correct there had to be a Palestinian State whose territory was occupied.
So please, inform us : On the day before the Six Day War, Where was the Palestinian State on 4th June 1967 can you show us a map in any international atlas, what were its boundaries, what was its capital, what was its currency (if I am not mistaken - Jordanian Dinar, Egyptian Pound), what passports were the people living there carrying (Jordanian and Egyptian).

International Court of Justice 13-0 that these are occupied territory. Paid Phillipo disagrees! I wonder what people should believe! You justify terrible acts": expulsion, expropriations, theft, racism, apartheid. You support immoral acts and that makes you an immoral actor. I think you showed everyone your face. Please inform us what peace do you envision?

No they did not. The overwhelming majority were expelled. Tell me if you are ready to give up 50 percent of Lebanon? Please stop this silliness. Yes I am against the Iranian occupation of Lebanon. That does not mean I am ok with engaging in the victimization of Palestinians. We cannot call for justice in Lebanon and call for injustice in Palestine

AFP is showing panic with this "world leaders praise" claim. It is one-third financed by the French government. So Macron should calm down.