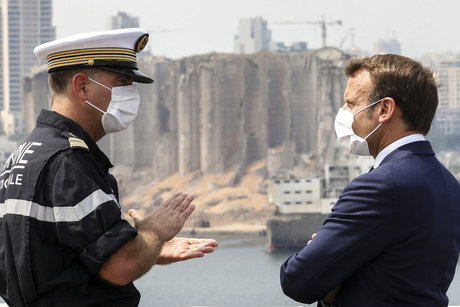 French President Emmanuel Macron on Tuesday described Hizbullah as a representative of “a part of the Lebanese people,” as he denied being behind the nomination of Mustafa Adib for the PM post.

“I don’t know the man, who was designated following binding parliamentary consultations… and we hope he enjoys the needed competency,” Macron told reporters at the blast-hit Beirut port.

In remarks to U.S. media outlet Politico, Macron had also rejected accusations that he personally chose Adib and made a deal with Iran.

"I don’t know him, I didn’t choose him, and it’s not my job to interfere or approve," he said.

Speaking at the port, the French leader said Hizbullah “represents a part of the Lebanese people and is an elected party.”

“Today there is a partnership between it and several other parties, and if we don’t want Lebanon to descend into a model in which terror would prevail at the expense of other matters, we have to educate Hizbullah and other parties about their responsibilities,” Macron added.

Asked about his soft approach towards Hizbullah in the Politico interview, Macron argued: "If we fight force with force, that’s called escalation," and that only leads to war, which he said is the last thing Lebanon needs.

"Don't ask France to come wage war against a Lebanese political force... It would be absurd and crazy."

"The difficulty of those who defend a pluralist path is not to fall into the trap of the escalation of powers; it’s the trap I don’t want to fall into and I won’t fall into, including in the Eastern Mediterranean," Macron said, referring to Turkey’s rising tensions with Greece over maritime territory.

He also described his efforts in Lebanon as a “risky bet.”

"It’s a risky bet I’m making, I am aware of it … I am putting the only thing I have on the table: my political capital," he told Politico.

Macron added that he plans to engage with the new prime minister-designate and all Lebanese political parties in parliament -- including those he doesn’t agree with.

He also said he wants credible commitments from political party leaders that they’ll make reforms, including a concrete timetable for implementing changes and holding a parliamentary election within “six to 12 months.”

Separately, Macron said the nomination of Nawaf Salam for the PM post would not have worked.

Hizbullah had reportedly vetoed the choice.

"If I imposed Mr. Nawaf Salam ... we kill his candidacy because we put him in a system in which the parliament will block everything,” Macron said.

But Macron also accused Lebanon’s anti-government protest movement of not rising to the occasion.

"A name works if the street knows how to produce a leader who leads the revolution, and breaks the system. It didn’t work, at least not today, maybe tomorrow or after tomorrow it will."

The French president does not care if hezbollah is a terrorist organization, involved in sectarian wars in several Arab countries, blew up half of Paris in the 1980's. He also forgets hezbollah is an iranian tool as long as they are elected. Mr. Macron, if Al Baghdadi of ISIS was elected by the Salafis in Lebanon, would you be saying the same thing and would you meet one on one with the head of ISIS block in the Lebanese parliament?

It is the Lebanese political parties that have allowed this cancer to spread. Why allow a political or militia to maintain weapons after the civil war? Who are they to protect Lebanon? Why Mr Macron won’t you implement the UN resolution calls on all Lebanese and non-Lebanese militias to disband and declared support for a "free and fair electoral process". Implement that change before doing anything else! Merci!

In your hypothetical case, would the French Hizb be armed more then the state? I doubt it. The reality is, we each have our own opinions on how and where to invest to make our country great. Like it or hate it, the Hizb is a political party with a following. It's the Arms of the Hizb that make this equation imbalanced in Lebanon. The weapons are used to blackmail us and keep us hostage to a broken system.

The Nazi party was also elected by the people of Germany... just saying